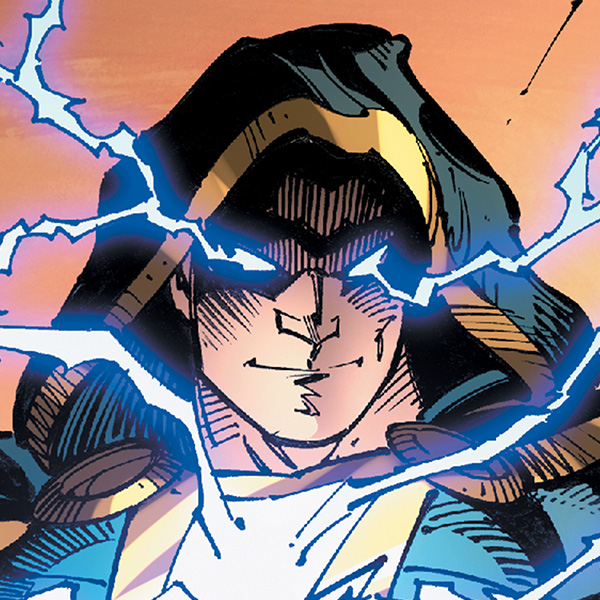 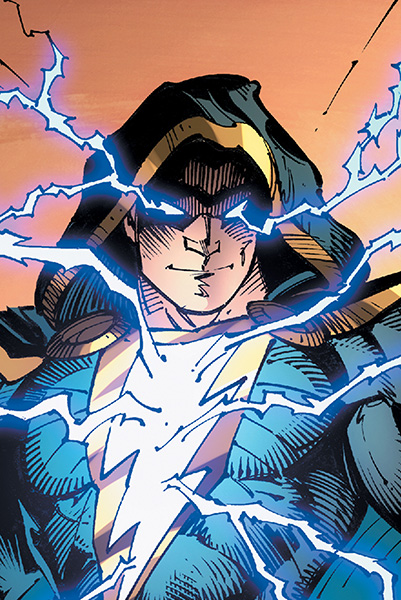 One of the world's foremost wielders of magic, Black Adam has been both hero and villain over a life that's spanned thousands of years.

One of the world's foremost wielders of magic, Black Adam has been both hero and villain over a life that's spanned thousands of years.

Thousands of years before Billy Batson became a magically-empowered hero, the wizard Shazam selected another champion. Teth-Adam or “Mighty Adam” began as a hero of humanity but then allowed his power to corrupt his ideals and desires. Now labeled Black Adam, he was exiled by Shazam but returned in the modern day. A frequent enemy to Earth’s heroes, Black Adam believes he is the right person to lead humanity and any action he takes is necessary for the greater good.

In his introduction story, Black Adam is said to be an Egyptian adult already known as Teth-Adam to those around him when the ancient wizard Shazam chooses him to be a champion. By shouting the wizard’s name, Teth-Adam draws power from a collection of deities and becomes a superhuman warrior. After deciding he would be a better ruler, he killed his pharaoh and assumed the throne. Shazam labeled him Black Adam now and exiled him to the “most distant star” in the universe.

Black Adam immediately started flying back to Earth, but it took him five thousand years to do so. By this point, Shazam had granted his power to new champions, the Marvel Family of Captain Marvel (Billy Batson), his sister Mary Marvel (Mary Batson) and their friend Captain Marvel Jr.  (Freddy Freeman). Black Adam decided they were now his enemies (THE MARVEL FAMILY #1, 1945).

Following the events of the 1985-1986 limited series CRISIS ON INFINITE EARTHS, DC history was rebooted. In his new origin story, Teth-Adam is the son of Ramesses II and impressed the wizard Shazam with his good deeds before being selected by his champion. This version of the origin said that he was corrupted by Blaze, the demonic daughter of Shazam, and had to be stopped when he turned against humanity after acting as a hero for centuries (THE POWER OF SHAZAM! #10-12, 1995-1996).

Thousands of years after Black Adam was magically imprisoned, his descendant Theo Adam absorbed his power through an enchanted scarab and became the new version of Black Adam (in 1994’s THE POWER OF SHAZAM! graphic novel).

Eventually, the real Black Adam returned and resumed a life on Earth, fighting the new champion Billy Batson and determined to once again establish himself as a just ruler.

Later comics revised this slightly, saying that Teth-Adam was native to Kahndaq not Egypt and that, after being selected by the wizard, he also served as a warrior under the leadership of Prince Khufu (one of the many incarnations of the hero Hawkman). Teth-Adam felt that his duty was to humanity but also wished he could spend more time in Kahndaq with his wife and child (JSA #22, 2001).

When his family was killed and his country conquered by the villains Vandal Savage and Ahk-ton, Mighty Adam was consumed with rage and vengeance. After killing Ahk-ton, he was determined to take back his country by force, which was now when the wizard Shazam put a stop to him (JSA #43-44, 2003). Thousands of years later when he escaped his magical imprisonment, he was still driven by this need for vengeance against what he deemed to be injustice and determined to be a better ruler for Kahndaq. 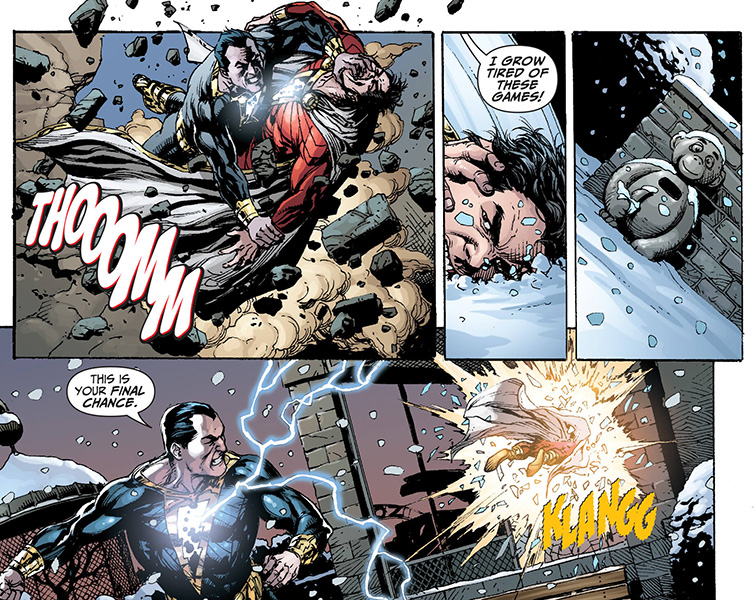 In his human form, Black Adam is a normal human being and has all a normal person’s vulnerabilities. After saying the word “Shazam,” he transforms into a being empowered by different deities. In his first appearance, it was said that he drew from the same beings who empower Billy Batson, meaning he had the wisdom of Solomon, the strength of Hercules, the stamina of Atlas, the power of Zeus, the courage of Achilles, and the speed of Mercury. Later comics established that Black Adam instead takes his power from Egyptian deities, and that he gains the stamina of Shu, the swiftness of Heru, the strength of Amon, the wisdom of Zehuti, the power of Aton, and the courage of Mehen.

In his magically-empowered form, Black Adam is immune to disease and age. He has strength, speed, stamina and resiliency to injury all on par with heroes such as Superman, Wonder Woman and Shazam. He is unaffected by conventional Earth weaponry and attack, able to heal quickly when he is wounded, and resistant to certain forms of magical attack. Some figures in the DC universe consider him on par with being a demigod.

Black Adam’s mind is enhanced by his magic power, giving him near photographic memory, as well as a great understanding of mathematics, combat strategy, languages, and sciences. He can also sometimes sense mystical forces at work.

In recent years, Black Adam has also displayed the ability to generate and control lightning. This mystic lightning can also enhance the power of other magic spells. 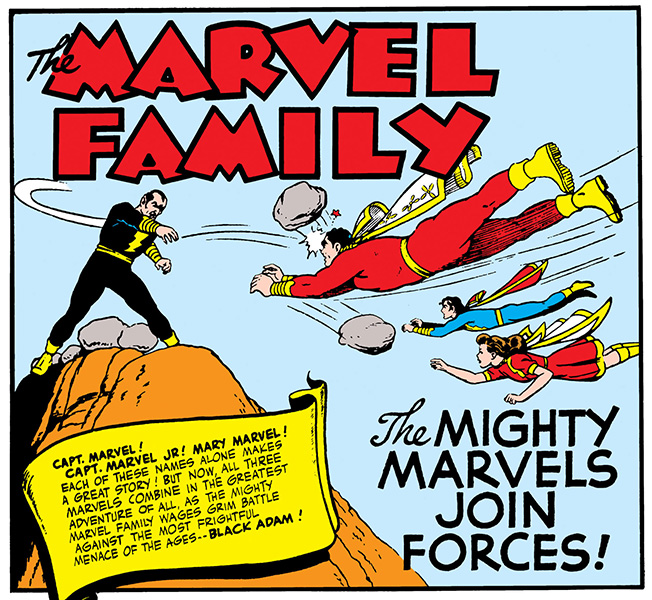 The original version of Black Adam only fought Shazam’s modern champions once. Their battle ended when he was tricked him into saying the magic word that turned him back into a mortal who should have died thousands of years before, and he instantly turned to dust and died (THE MARVEL FAMILY #1, 1945). He was later revived with technology by the evil scientist Dr. Thaddeus Sivana, after which he fought the Marvel Family a few more times before 1985-1986's CRISIS ON INFINITE EARTHS led to a reboot of history. 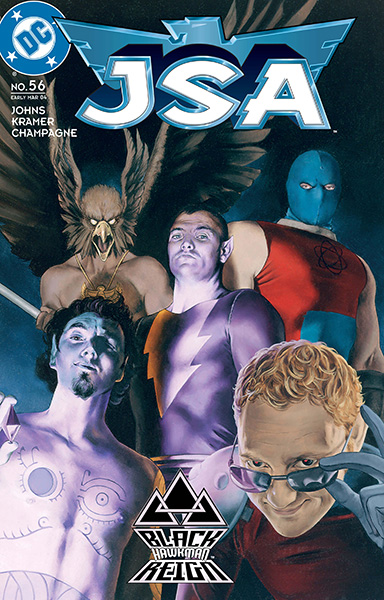 After his power was used by his descendant Theo Adam, Black Adam fought Billy Batson again before then spending some time exiled to deep space. When he returned, he claimed to be free of Theo Adam’s influence and now fully in command of his mind. He joined with the heroes of the modern day Justice Society of America, believing he still had a duty to help people even if he disagreed with his new teammates about what methods were too harsh to use on their enemies (JSA #21, 2001).

At one point, after the villain Johnny Sorrow of the Injustice Society removed a malignant tumor from his brain, Black Adam seemed to turn against the JSA. But this was a ruse so he could actually help bring down the Injustice Society from the inside. Later though, he decided the JSA were too merciful and formed his own team of champions and, with their aid, he murdered the terrorist Kobra and took over Kahndaq (JSA: BLACK REIGN #1, JSA #56-58, HAWKMAN #23-25, 2003-2004). He then joined the Secret Society of Super-Villains, believing the alliance would serve Kahndaq’s interests (INFINITE CRISIS #1-7, 2005-2006). 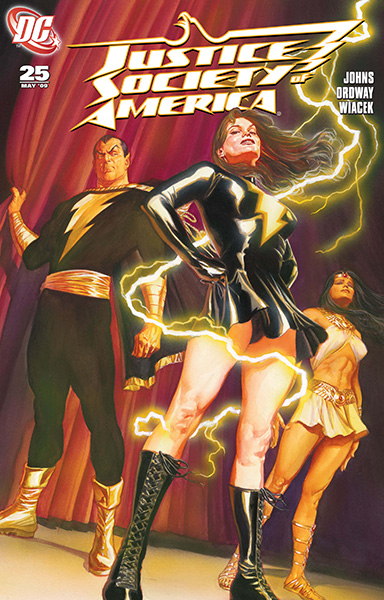 Adrianna uses the Amulet of Isis, which once belonged to another of Shazam’s champions, to become a super-powered being herself. As Isis, she helped guide Black Adam with mercy and a stronger ethical foundation, and the two soon married (52 #10, 12, 16; 2007). Later, her brother Amon joined them and was granted power as well, becoming the hero Osiris and completing the new Black Marvel Family.

Later on, villains known as the Four Horsemen attacked the royal family of Kahndaq. Osiris died and Isis was fatally wounded. Before dying, she told Black Adam that she’d been wrong to temper him and asked him to avenge her and her brother. Black Adam then invaded the neighboring country of Bialya and killed 2 million of its citizens as he hunted for the Horseman called Death. Black Adam discovered that the villainous Science Squad had sent the Horsemen after one of its members made a deal with China to remove the powerful royal family of Kahndaq.

After being tortured by the Science Squad for weeks, Black Adam was freed but refused to face consequences for his actions in Bialya, instead launching attacks around the world for a week before he was finally defeated. Forced to change back into his mortal form, Adam escapes but finds that Billy Batson altered the his magic so that it won’t be activated by the word “Shazam” (WORLD WAR III #1-4, 2007). Powerless, it is months before Adam discovers he needs to say “chocolate egg cream” to become Black Adam again (JUSTICE SOCIETY OF AMERICA #25, 2009).

Following his restoration to power, Black Adam reflected on his life in recent years and recruited Mary Marvel to his side, helping to turn her to a darker path. He then fought against her when he realized she had been possessed by Desaad, agent of the New God called Darkseid (FINAL CRISIS #5, 2009).

Through the life restoring Lazarus Pit, and later reinforced by magic, Adrianna was resurrected. But after she and Black Adam returned to Kahndaq, Adam concluded that Isis was now corrupt and that they needed to give up the power of Shazam to save themselves. Using the magic at their disposal, Billy and Mary Batson then turned Adam and Adrianna into statues. Later, Adrianna was restored to life and assumed rulership of Kahndaq (TITANS #37, 2011). 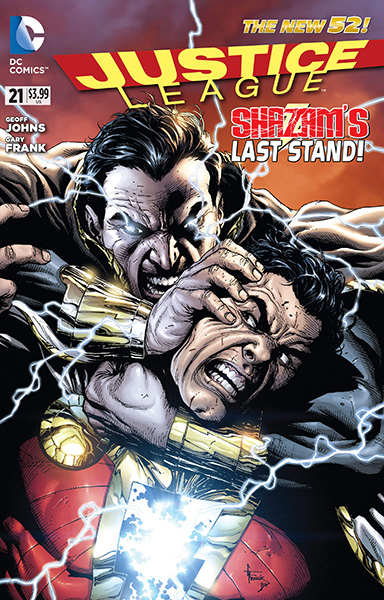 In 2011, DC’s New 52 reimagined the history of the universe. In the New 52 version of events, Adam is not really a chosen champion of the wizard Shazam. At first, Shazam chooses a slave boy named Aman to be his champion. Aman then finds a way to share his power with his uncle Adam, an escaped slave, in order to heal him. Aman hopes to use his new power to unify the people of Khandaq and end slavery peacefully, but Adam wants vengeance and so he kills the boy and takes all the power for himself (JUSTICE #7, 10; 2012; JUSTICE LEAGUE #20, 2013).

Adam then went off as Black Adam, fighting the being known as the Seven Sins and inspiring legends of a dark avenger of evil. Seeing his corrupt nature, Shazam retaliated and imprisoned Adam, now calling him Black Adam (JUSTICE LEAGUE #20, 2013).

Thousands of years later, Dr. Thaddeus Sivana discovered the tomb of Black Adam and released him. Sensing there was another champion of Shazam now active, the boy Billy Batson, Black Adam hunted him (JUSTICE LEAGUE #20, 2013). The two battled and then Billy Batson tricked Black Adam into saying the magic word “Shazam.” Transforming back into his mortal form, Adam suddenly aged and disintegrated into dust as the many years of his life caught up to him (JUSTICE LEAGUE #21, 2013).

Black Adam was resurrected months later by revolutionaries in Kahndaq. After fighting and defeating the local military, he killed Kahndaq’s ruler and declared himself the nation’s protector. He then joined with others in fighting the Crime Syndicate, a corrupt version of the Justice League from a parallel universe (FOREVER EVIL #1-7, 2013-2014).

As a result of DC Rebirth in 2016, some of the Pre-New 52 history has been restored to the DC Universe. How this has affected Black Adam’s history has yet to be fully explained. Recently, he has appeared in his New 52 costume and claimed allegiance to the loose organization known as the Council of Immortals, people of Earth with long lifespans who sometimes meet to discuss how to deal with worldwide threats (DC METAL #4, 2017).