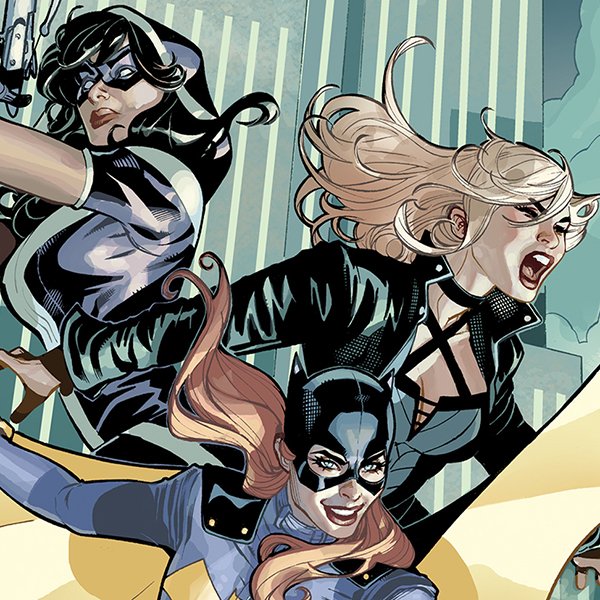 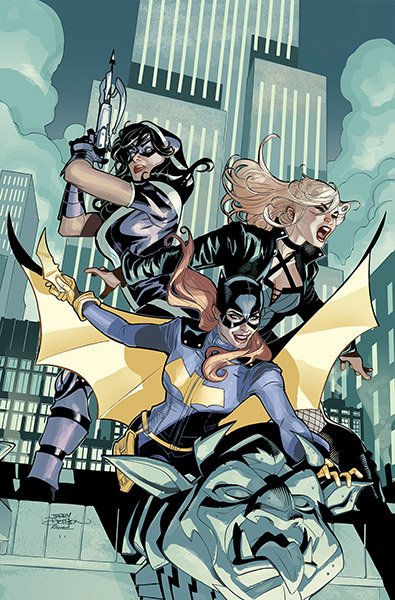 Their roster has included the likes of Black Canary, the Huntress, and Batgirl. Fearsome fighting females who combat the carrion infesting their city. Watch the Birds of Prey soar. 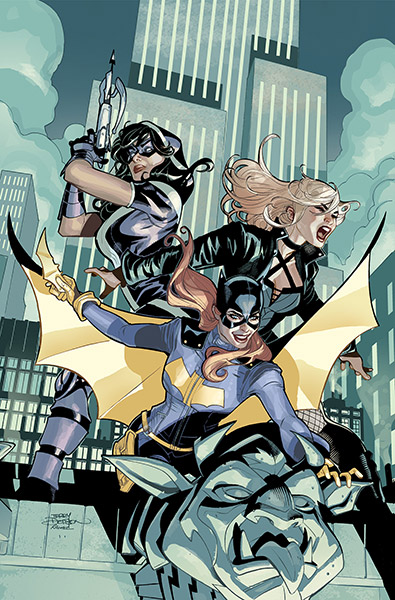 Their roster has included the likes of Black Canary, the Huntress, and Batgirl. Fearsome fighting females who combat the carrion infesting their city. Watch the Birds of Prey soar.

A femme force to be reckoned with, the Birds of Prey is traditionally an all-women group of vigilante operatives who’ve gone on covert missions across the globe. Originally a partnership between Black Canary and Oracle, the team’s roster has grown over the years to include friends—and frenemies.

The trio of Black Canary, Oracle and Huntress made up the backbone of the group; operating out of Gotham’s Clock Tower, a maximum-security facility with a state-of-the-art, high-tech computer system known as the Oracle Mainframe. The heroes’ combined résumé of mental and physical skills reads like a Swiss army knife on steroids.

Though the Birds of Prey have had their differences and trust issues from time to time, whenever they band together, they play a sweet symphony of justice. 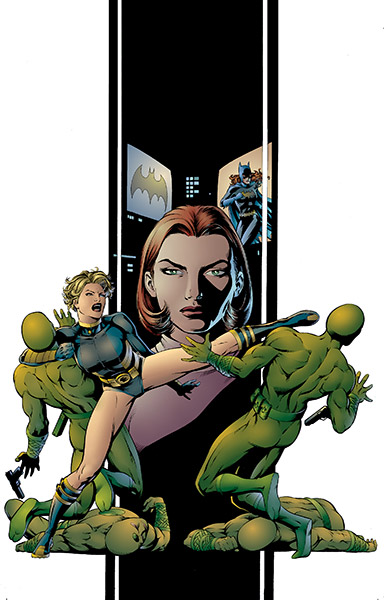 Before they became the Birds of Prey, they were Oracle and Black Canary. Inhabiting the role of Batgirl until an attack by The Joker left her crippled, Barbara Gordon decided to change the way she fought crime. She became Oracle, a computer-hacking data specialist. As an intelligence expert without peer, she aided Black Canary (a.k.a. Dinah Lance) with escape routes, criminal profiles, weapons manuals and any other form of information. The Clock Tower in Gotham City served as their initial headquarters, from which Oracle maintained a vast computer system and database. Oracle would brief Black Canary about each assignment via earpiece, and Black Canary exercised muscle and wit to get the job done, from stopping terrorists and slavery rings to exposing global conspiracies.

The Huntress (a.k.a. Helena Bertinelli) and Lady Blackhawk (a.k.a. Zinda Blake) later joined the duo, becoming integral members of the team over time. It was Zinda who suggested the team be called the Birds of Prey and more vigilantes joined to the roster—among them Catwoman, Katana, Poison Ivy and Starling.

Black Canary can unleash a sonic scream (her “Canary Cry”) that shatters objects and renders her opponents immobile. She’s also an expert in martial arts and possesses advanced knowledge of military tactics. A mix of brains and brawn, Oracle is an intelligent computer whiz and a keen strategist with skills in unarmed combat to match. Huntress is highly skilled at hand-to-hand combat. An ace in the air, Lady Blackhawk is an expert pilot and a proficient marksman. 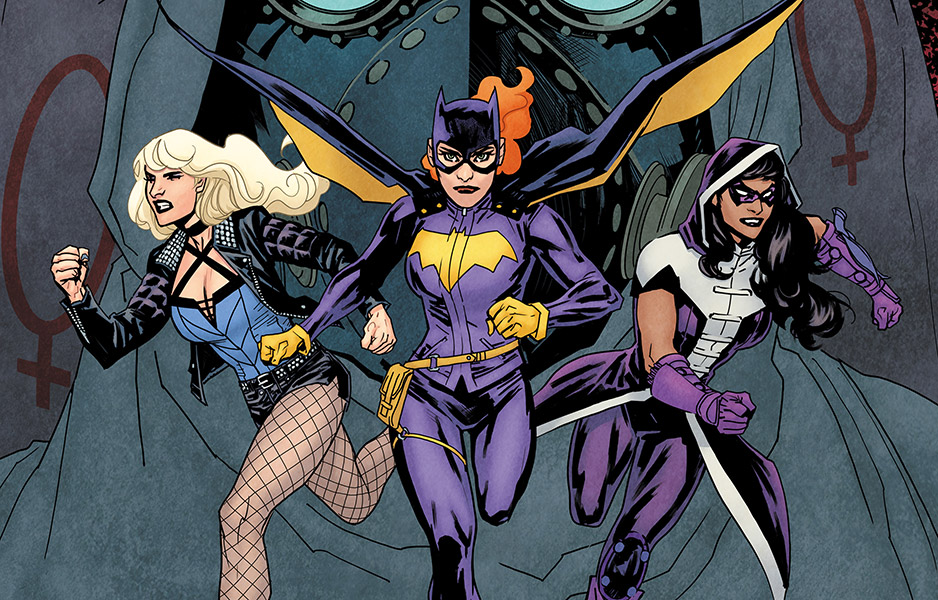 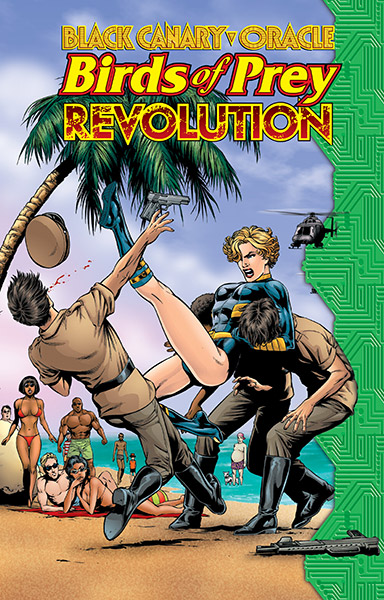 Birds of Prey first took flight in the 1996 one-shot BLACK CANARY/ORACLE: BIRDS OF PREY #1. Oracle called upon Black Canary to head a mission in Gotham and help expose the truth about the Green Brotherhood, an ecoterrorist group sabotaging the projects of international businessman Nick Devine. Devine offered Black Canary a job as a bodyguard after she thwarted a Green Brotherhood attack on him. She soon learned Devine himself was behind the terrorist acts. With Oracle’s help, Black Canary took him down before another country fell victim to his schemes. This first operation solidified the crime-fighting partnership between the two women, though they would not meet face to face until they carried out several more missions.

In BIRDS OF PREY vol. 1 #56-59 (2003), the Birds encountered mercenary and one-time DC Super Hero Savant, along with his partner, former Russian military man Creote (in the “Of Like Minds” story arc). Here, they battled a villain whose mental and physical skills rivaled their own. Fortunately, they triumphed with the addition of the Huntress to their ranks.

After the Batman “War Games” event, the Birds of Prey’s Clock Tower (located in Gotham City) was left in total ruin. Thus, Oracle and the Birds found themselves without a nest in 2004’s BIRDS OF PREY #75. They established a new mobile base of operations aboard a customized jet, Aerie One. Piloted by Lady Blackhawk, the Birds took to the skies and eventually settled down in Metropolis’ Dalten Towers. Now working out of Superman’s home city, the Birds of Prey got back into the grind and completed missions that involved drug lords, assassins and mobsters. 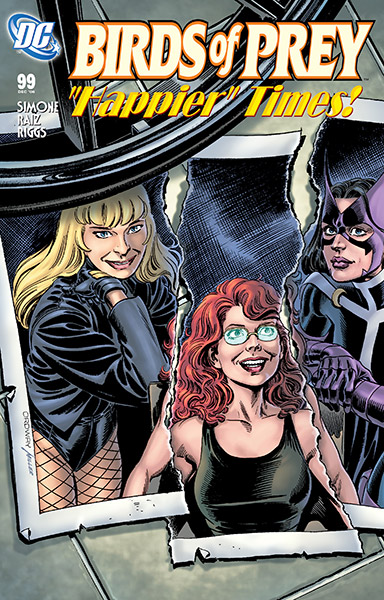 During Black Canary’s one-year stint in Asia she learned a lot from Mother, the martial arts master who’d once trained Lady Shiva. When her time concluded, Black Canary returned to Metropolis with a young girl named Sin, whom she’d met in a small village. As a “sister” to the child, Black Canary began questioning her role on the team in BIRDS OF PREY #99-100 (2006-2007). With a heavy heart, she decided to resign from the team, devoting more time to raising Sin in America. In so doing, she sought to avoid the mistakes made by her mother, the original Black Canary, whose crime-fighting job placed a strain on their relationship.

The New 52 universe saw the Birds of Prey start out in the form of another duo. In BIRDS OF PREY vol. 3 #1 (2011), Starling, an old acquaintance of Black Canary, teamed up with Barbara Gordon, once more fighting crime as Batgirl rather than Oracle. After recruiting Poison Ivy and Katana, the newly formed team fought Choke, a villain with the power of mind control.

Unfortunately, when they went face to face against the Court of Owls, a secret society targeting Batman, the Birds began to unravel from the inside. Poison Ivy betrayed the team, poisoning them so she could force them to battle environmental criminals. And Katana became unhinged and killed Poison Ivy before leaving the team entirely.

Condor, a male teammate, and Strix, a former member of the Court of Owls, then joined the Birds. But even as the group worked to rebuild trust, another member tore it down when Starling betrayed the team to Mr. Freeze. 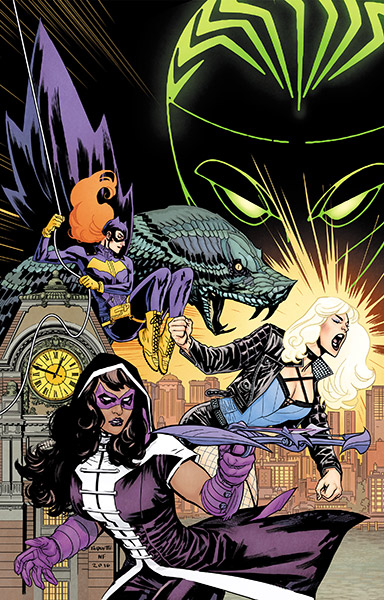 Some people have one alter ego. Barbara Gordon had two: Batgirl and Oracle. While she still moonlit as Batgirl to fight crime in Gotham City, she’d long since retired from the role of Oracle. Or so she thought. In the wake of 2016’s DC UNIVERSE: REBIRTH #1, when Barbara Gordon’s past resurfaced, she, along with Black Canary and Huntress, headed out to discover who was trying to resurrect Oracle.