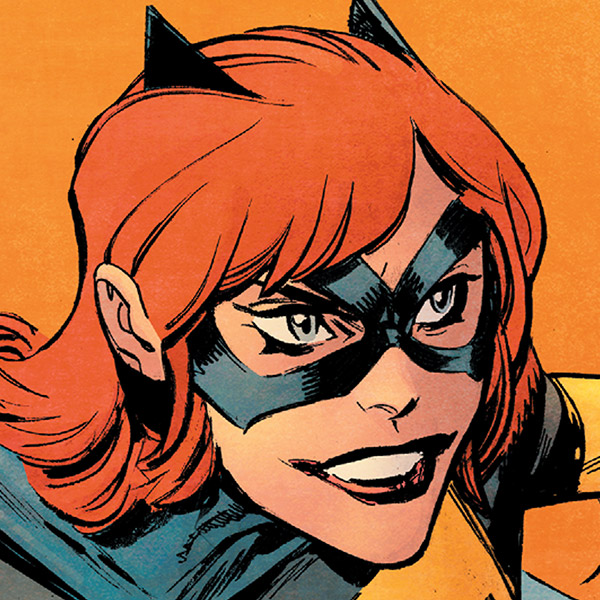 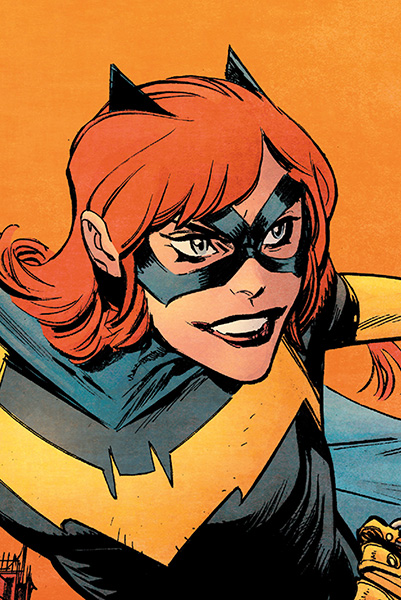 Barbara Gordon redefined what it meant to be a self-made hero when she crafted her own costume and joined Batman's crusade right under her father's nose.

Barbara Gordon redefined what it meant to be a self-made hero when she crafted her own costume and joined Batman's crusade right under her father's nose.

The mean streets of Gotham City have a number of guardian angels watching over them. And one of the first – the young woman who first turned the Dynamic Duo into the Batman Family – was Batgirl. Barbara Gordon has always existed between two worlds: her life at home as the only daughter of Police Commissioner James Gordon and her life swinging from gargoyles as an associate of the Dark Knight and a founding member of the Birds of Prey.

Though the two halves of her life don’t always mesh, she stays true to the things she believes in. A genius-level hacker and information broker, and an expert martial artist, Babs has, like her namesake, proven to be a fierce survivor, and one of Gotham’s most cherished protectors.

In the Silver Age of comics, Barbara Gordon was introduced as the adult biological daughter of Gotham City police commissioner James Gordon. A librarian at the Gotham City Library inspired by Batman, she created and wore a Batgirl suit for the city's Policeman's Masquerade Ball. That night, she encountered the villainous Killer Moth and aided Batman and Robin in taking him down. She henceforth committed herself to battling crime in Gotham City. 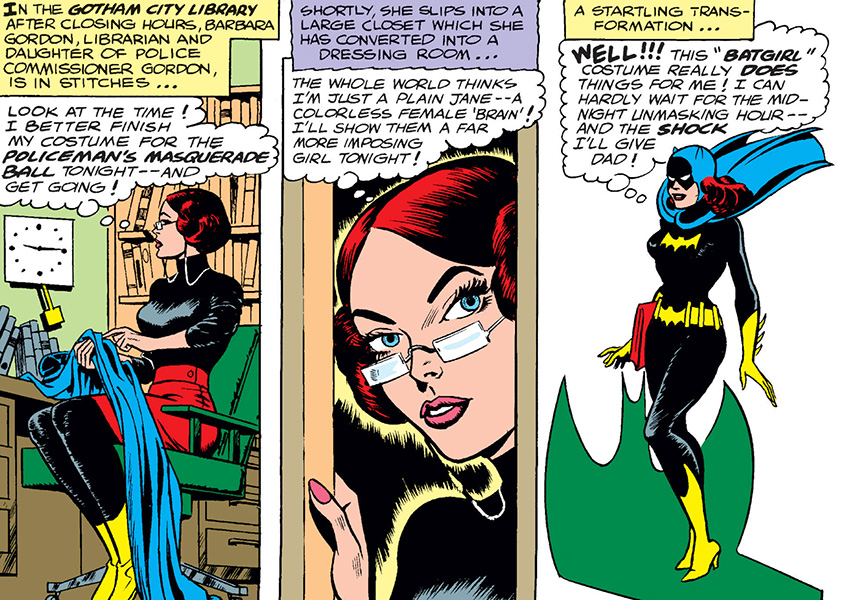 Following 1984's continuity-altering CRISIS ON INFINITE EARTHS event, Barbara was given a new history. After the tragic deaths of her biological parents, Barbara, now better known as “Babs,” was adopted by her uncle, Jim Gordon, in Gotham City. There, she became obsessed with the city's Caped Crusader, Batman. One night, she discovered her father, the commissioner of the GCPD, regularly had secret meetings with the Dark Knight.

That moment inspired Barbara to dedicate herself to the dream of becoming a Super Hero. She enrolled in martial arts classes, began studying to become a PhD student, and honed her craft as a crimefighter until she was ready to make her debut as Batgirl.

Though she began her life wearing Batman’s symbol independently, she quickly won the attention of Batman and the first Robin, Dick Grayson. She worked closely with Dick until she was accepted as a partner of the Dark Knight. 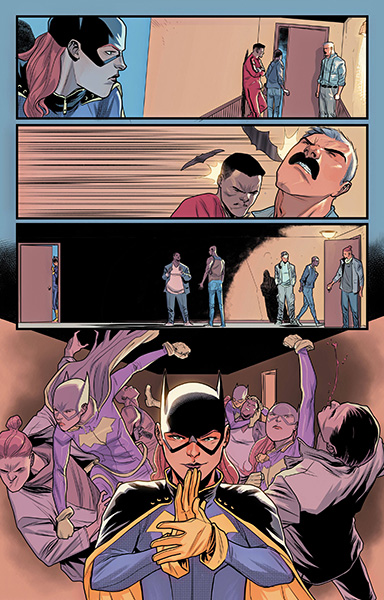 Babs does not have any superpowers or metahuman abilities. Instead, she relies on her physical strength and keen intellect to save lives and thwart the plans of super-villains. An expertly trained martial artist, Babs also has a special affinity and aptitude for technology. She is an accomplished computer engineer and one of the world’s finest hackers.

Babs has a didactic or "photographic" memory, which allows her to completely recall anything she looks at in complete detail. 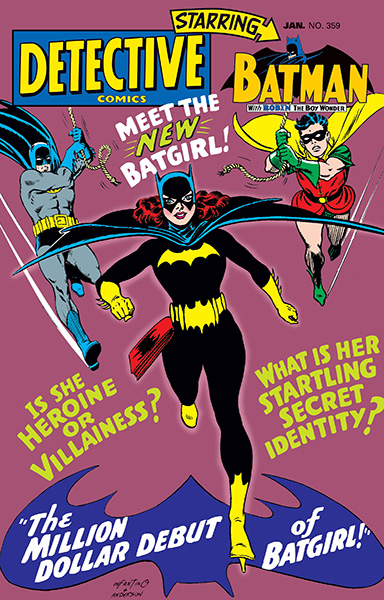 Barbara was formally introduced in 1967’s DETECTIVE COMICS #359 (shortly after she’d been introduced on the 1966 Baman TV show). In her earliest incarnation, she was a career-minded, driven young woman and head librarian at the Gotham City Public Library. One night, while wearing a Batgirl costume to a masquerade ball, she ran afoul of the Super-Villain Killer Moth, and helped Batman and Robin bring him to justice. Shortly thereafter, she regularly partnered with the Dynamic Duo.

As time passed, Babs became a fan-favorite addition to the Batman Family. She went on to meet other Super Heroes in the DC universe and became especially good friends with Supergirl.

The adventures of Barbara and Dick Grayson were a feature in 1975’s ongoing BATMAN FAMILY. Although Dick was a college freshman and Barbara was a successful career woman, and eventually a congresswoman, the two enjoyed a flirtatious relationship in these stories. Dick also served as an assistant to Barbara in Washington.

Barbara officially "retired" from her role as Batgirl in 1988’s BATGIRL SPECIAL #1. Shortly thereafter, in 1989’s THE KILLING JOKE, Barbara was shot by the Joker as a means of torturing her father, Jim Gordon. The gunshot wound left Barbara paralyzed and wheelchair bound. 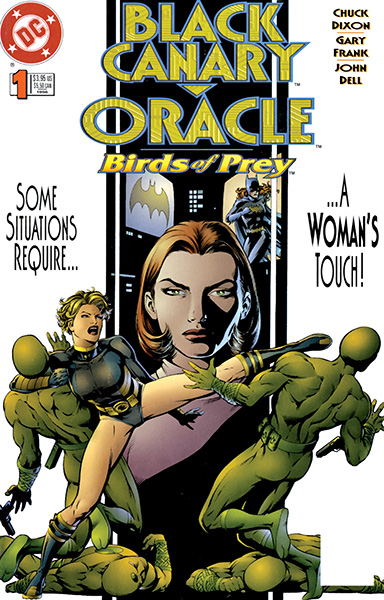 In 1989’s SUICIDE SQUAD #23, Barbara began to re-emerge under the new codename of Oracle, and began specializing in hacking and providing intel and computer support for a network of allies.

As Oracle, Babs was more integral to the DC Universe than ever before. Working far beyond the city limits of Gotham, she traveled wherever the flow of information took her. She worked at first in secret, for various teams, before her identity was officially revealed in SUICIDE SQUAD #38 (1990).

The years that followed saw Babs become a more prominent hero than ever before. She worked as the primary information broker for most every active Super Hero in the DC universe, as well as the chief liaison between various Super Hero teams and local law enforcement agencies; which she continued to access via her father's position.

Eventually, she formed a Gotham-based team known as the Birds of Prey with fellow hero Dinah Lance (BLACK CANARY/ORACLE: BIRDS OF PREY, 1996). The Birds became Babs' primary focus, even as she continued her solo global efforts as Oracle. Huntress and Lady Blackhawk eventually joined the Birds of Prey, and the group expanded its operation throughout neighboring cities.

Following a massive earthquake and the subsequent declaration of Gotham City as a "No Man's Land" (in the 1999 event of the same name), Babs met Cassandra Cain, whom she would train as the new Batgirl -- a role that had not been officially filled since Babs had been shot. Babs and Cassandra became close friends, and Babs dedicated her free time to helping the mute, unsocialized Cassandra integrate into society, teaching her basic language and communication skills.

Following the lifting of the No Man's Land sanctions, Babs reconnected with former flame Dick Grayson and the two rekindled their romantic relationship.

Babs was forced to destroy the Clock Tower, her base of operations, in the fallout from 2004’s "War Games" storyline. The decision was so traumatic it inspired Babs to -- for a time -- sever ties with the Batman family and with Gotham City altogether. She relocated to Metropolis, where she worked during 2006’s INFINITE CRISIS and 2007’s "One Year Later" events. Around the same time, Barbara and Dick's romance fell apart. The two had become engaged, but the engagement was dissolved following Dick's relocation to New York City after the destruction of his home city of Blüdhaven (in 2006’s "Brothers in Blood" storyline).

Babs returned to Gotham City following the mysterious "death" of Batman in 2008’s FINAL CRISIS event. She worked closely with the remaining Batman family members to maintain order in the city in the Dark Knight’s absence. During this time, the mantle of Batgirl was passed to Stephanie Brown (a.k.a. the Spoiler), whom Babs reluctantly trained. 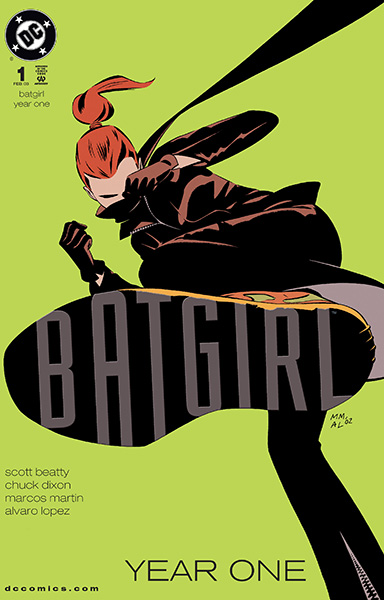 Not so easily dissuaded, Babs hacked into the computer system of the Justice League International in an attempt to convince the Black Canary to train her. She was intercepted by Wildcat, who refused to pass her message along.

Frustrated, Barbara created her own version of Batman's costume, just to get back at her father. She wore it in attendance to a costume ball, which was crashed by the Super-Villain Killer Moth. Not content to wait for Batman’s aid, Babs battled Killer Moth herself. It was Killer Moth who first dubbed her "Batgirl," which gained the attention of Batman himself.

Though they were initially dismissive of her, both Batman and Robin soon warmed to the idea of allowing Batgirl into their inner circle. Robin took a liking to her and the two began a flirtatious friendship on their nightly rooftop patrols. Eventually, Batman agreed to test Babs' capabilities as Batgirl. Following her successful completion of several challenges he threw at her, Batman accepted her as his second protégé. 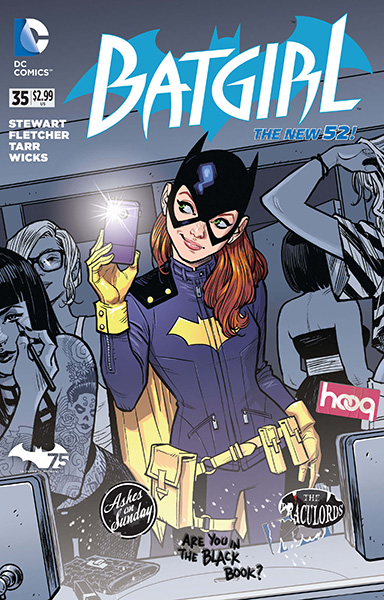 Following 2011’s FLASHPOINT event, Barbara's history was reimagined. BATGIRL #1 (2011) now presented her as a woman in her early twenties rather than her mid to late thirties. Her shared history with Dick Grayson remained mostly intact, but it was condensed in the new timeline; which saw her spend little time as Oracle. Following her attack by the Joker, an experimental procedure allowed Barbara to regain her mobility and return to her Batgirl identity.

As Batgirl, Babs operated predominantly in Gotham City before she relocated to the newly introduced neighborhood of Burnside. In BATGIRL #35 (2014), Babs reinvented herself in the hip Gotham area of Burnside, designing a new costume and attending school full-time to get her PhD, while still patrolling the neighborhood as a Super Hero when the sun went down.

The events of 2016’s DC UNIVERSE REBIRTH #1 left Barbara in much the same position she had occupied following during the New 52. In BATGIRL AND THE BIRDS OF PREY: REBIRTH #1, Babs expanded her operation as Batgirl beyond Burnside in and once more organized the Birds of Prey, alongside Dinah Lance (Black Canary) and Helena Bertinelli (Huntress).

During her time with the Birds of Prey, Barbara learned that a stranger had coopted the name Oracle and was using her former Super Hero identity to sell secrets to organized crime. The trio hunted down the faux Oracle, and learned it was a civilian boy who’d simply been a huge fan of Barbara. Though this version of the team eventually disbanded, most of Babs’ history as Oracle has since been folded back into Rebirth continuity — a role which has presented particular interest to the mysterious Leviathan in EVENT LEVIATHAN.

Only months after her debut in the comics, Barbara Gordon was added to the 1960s BATMAN TV series in order to convince the network to renew the show for a third season. (Submitted by  nu52)

According to BIRDS OF PREY and BATGIRL writer Gail Simone, Barbara Gordon is the most intelligent member of the Bat-Family. (Submitted by c02goddess.16092)

During her time as Oracle, Barbara Gordon didn't have handles on her wheelchair, because she "[didn't] like to be pushed." (Submitted by BatJamags)

In addition to a PhD in Library Science from Gotham University, Barbara Gordon earned a Master of Law degree from Harvard. (Submitted by cyberbatgirl)

Years before she was Batgirl, a very young Barbara Gordon briefly fought crime with Superboy as the superheroine "Mighty Girl." (Submitted by JoshuaLapinBertone)