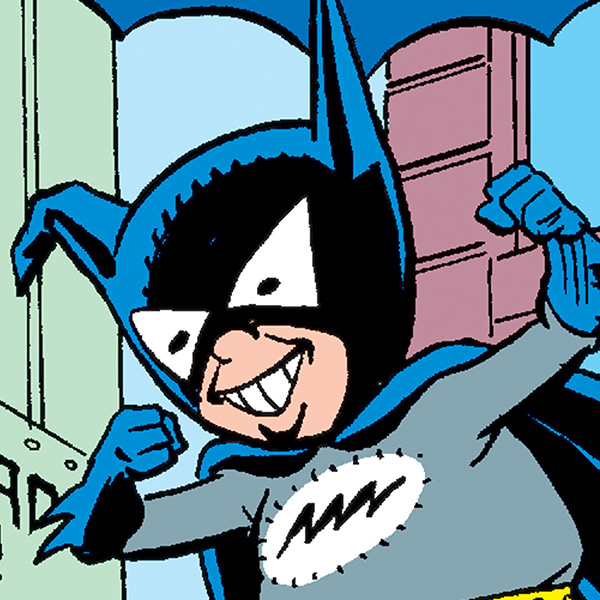 A mischievous imp from the 5th dimension, Bat-Mite idolizes Batman, though his attempts to aid the Dark Knight usually end in disaster.

A mischievous imp from the 5th dimension, Bat-Mite idolizes Batman, though his attempts to aid the Dark Knight usually end in disaster.

Superman isn't the only DC Super Hero who's often pestered by a troublesome imp with near infinite powers. Much like Mister Mxyzptlk, the tiny creature known as Bat-Mite also hails from the 5th Dimension, and has seemingly unlimited reality-warping powers. Bat-Mite, whose real name is unknown, idolizes the Caped Crusader, and has watched him from afar for many years. But while Mister Mxyzptlk seems to enjoy antagonizing Superman, Bat-Mite just wants his hero to acknowledge him as something more than  a nuisance, and maybe even make him his partner. As a way of showing the Dark Knight how much he idolizes him, Bat-Mite wears a replica Batman costume, albeit an ill-fitting, poorly tailored one (even though it was created by magic).

In the post-FLASHPOINT timeline, Bat-Mite was reprimanded for his continued interference with the Earth and with the Batman family. The so-called council of Mites, who'd monitored him from their home in the 5th Dimension, decided to forcibly bring him back to their world. There, they asked him to join their team, the Justice Mites of America, but only on the condition he refrained from interfering with any other dimensions ever again. He accepted the conditions. But it's unlikely that he'll ever leave the Batman alone for too long. Although it has never been conclusively determined, it is possible that Bat-Mite isn’t actually a real being, but is instead a figment of the Dark Knight's own imagination.