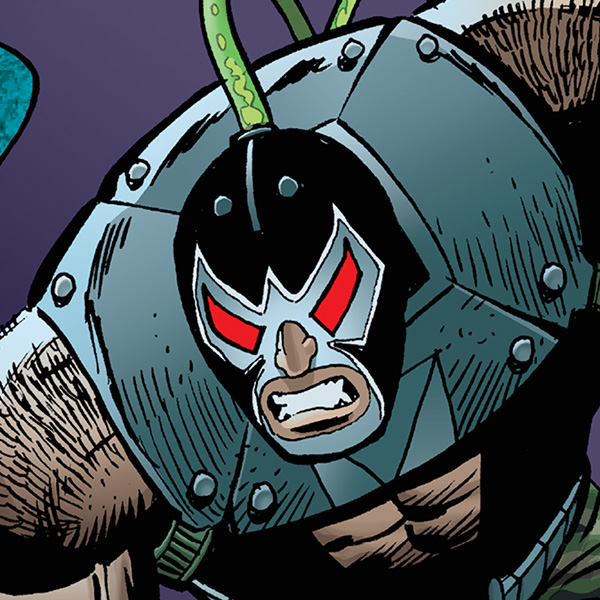 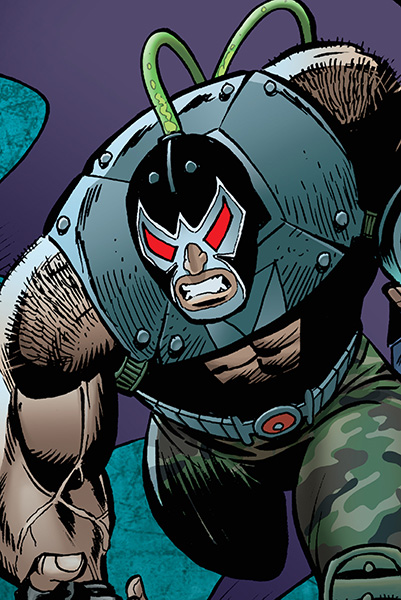 Raised in a prison on the island of Santa Prisca for the crimes of his father, Bane dedicated his life to honing his mind and body into a perfect weapon.

Raised in a prison on the island of Santa Prisca for the crimes of his father, Bane dedicated his life to honing his mind and body into a perfect weapon.

In order to wage his unending war on injustice, Batman has developed his body as perfectly as he has his mind. But there’s one man who’s broken him. A man who stands in many ways as his exact opposite—a physical marvel and a genius without peer. But whereas the Dark Knight was born to fight crime, Bane was destined for a life of corruption.

Born in a prison on a remote Caribbean island, Bane was raised without pity or compassion. As an adult, he served as a test subject for the super-steroid called Venom. Superhumanly strong, Bane escaped his hell and headed to Gotham City—where he chose to make his mark by defeating the Batman. Though he succeeded, their initial battle was far from their last.

Since then, Bane has repeatedly tried to amass not only power but territory, whether it’s Gotham City or his home of Santa Prisca. Often at war with his personal dependence on the super-serum that gives him his strength, Bane will never stop fighting to prove he deserves to rule. 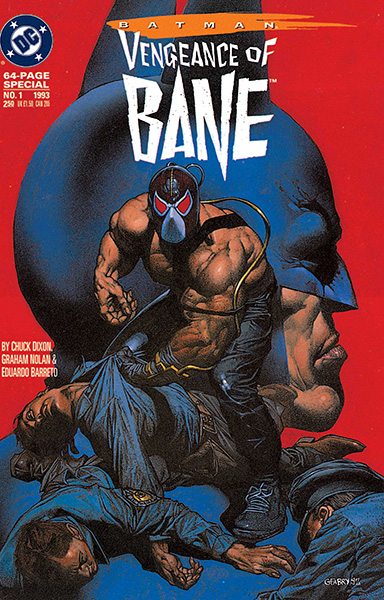 Bane is the son of a Santa Priscan woman and the British mercenary Sir Edmund Dorrance, also known as King Snake (as revealed in 2004’s BATMAN: GOTHAM KNIGHTS #47-49). Dorrance and his men aided rebels against the government in Santa Prisca when they were captured by commandos. Dorrance escaped, leaving behind a partner carrying his unborn child. Unable to capture Dorrance before he fled the country but wishing to make an example of him, the Santa Priscan government declared that his son would serve what would have been Dorrance’s life sentence. When he was born, the warden of the Peña Duro prison named the child Bane.

As seen in 1993’s BATMAN: VENGEANCE OF BANE, Bane grew up viewing the world through the lens of prison. He believed one survived by sheer strength and manipulation. His only friend was a teddy bear named Osito (Spanish for “Little Bear”). Before his tenth birthday, Bane killed someone, another prisoner, for the first time, proving to others he wasn’t easy prey. Over time Bane won a gang of followers, some of whom smuggled books into the prison so Bane could educate himself. He grew to be both a great fighter and an excellent tactician. Eventually, all prisoners deferred to his power.

As a young adult, Bane agreed to participate in experimental trials of the strength-enhancement drug known as Venom. With the serum coursing through his veins, Bane saw no reason to stay in Santa Prisca. After he and his gang escaped, Bane wanted a new base, and he set his sights on Gotham City. Still viewing the world as a prisoner, Bane believed he could cement a claim to power by defeating Gotham’s ruler, whom he saw as the Batman. Bane concluded he was destined to fight the Dark Knight. 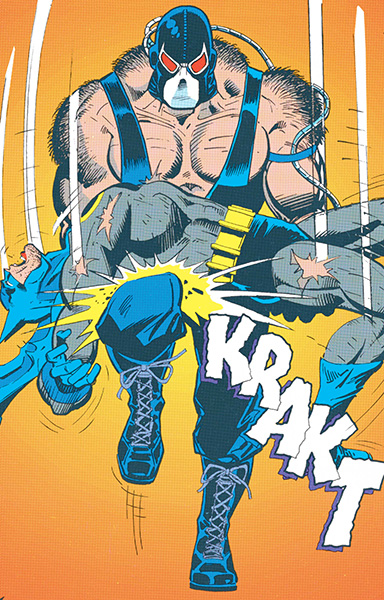 Bane is a cunning person said to have a genius-level intellect and a photographic memory. He possesses a keen understanding of military strategy, and is fluent in Spanish, English, French, German, Latin, Mandarin Chinese, Persian, Russian and Urdu.

Bane is also an expert fighter, having learned wrestling and different martial arts disciplines in prison, merging them with his own unique moves. His attacks rely on his strength in overpowering an opponent rather than on stealth and agility.

With the use of the Venom drug, Bane acquires superhuman levels of strength, allowing him to lift as much as two to three tons. Venom exponentially increases his speed, reflexes, healing and resistance to injury. Despite the advantages Venom gives him, the substance is ultimately his greatest weakness due to its addictive qualities. 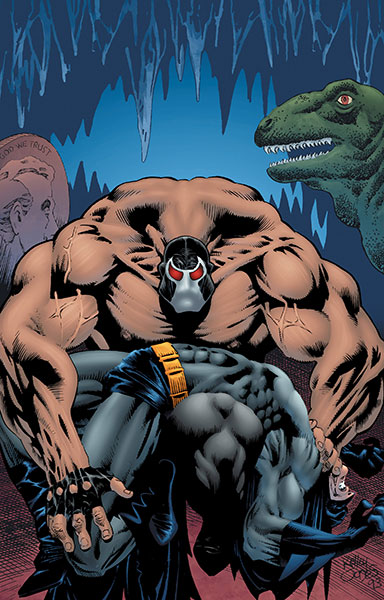 Bane’s greatest claim to fame is his role in 1993’s “Knightfall” storyline. Upon arriving in Gotham, Bane decided to study the Dark Knight from afar and force him to a point of exhaustion and vulnerability. To accomplish this, Bane and his gang freed the criminal inmates of Arkham Asylum and left them weapons to arm themselves. Over the course of the next several days, Batman rounded up the inmates with little chance for rest, observed by Bane the entire time.

After wearing Batman down and deducing his identity, Bane confronted the exhausted hero at Wayne Manor. Despite Batman’s efforts, Bane overpowered him and broke his back.

Despite his victory, Bane wasn’t immediately accepted as the ruler of Gotham’s underworld. Not everyone was willing to believe Batman was permanently defeated, and it appeared their suspicions were confirmed when Bruce Wayne’s temporary successor Jean-Paul Valley appeared on the scene. When Bane fought Valley, he was unprepared for the different tactics of this new Batman and was defeated.

With his defeat, Bane believed his dependence on Venom had actually weakened him as a fighter and stopped using the drug. After a period of withdrawal, he teamed up with the terrorist Ra’s al Ghul (whose daughter Talia Bane sought to marry) in another scheme against Gotham, unleashing a plague on the city in the 1996 storyline “Legacy.” In the end, Bruce Wayne (who’d since returned as Batman) stopped his plan and defeated Bane once again. 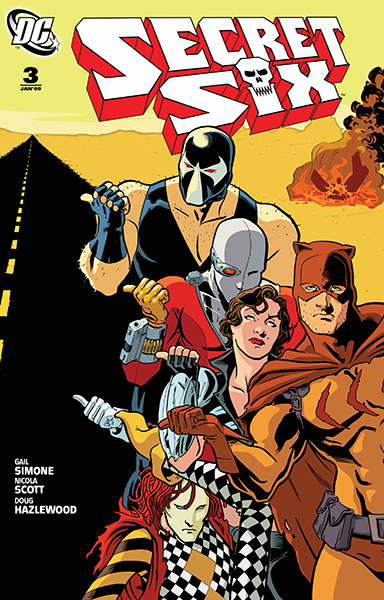 For a time, Bane became more antihero than villain, working alongside the group known as the Secret Six (SECRET SIX #1, 2008). He even helped Dick Grayson stem the chaos that erupted in Gotham City when Batman was briefly believed to be dead (SECRET SIX #9, 2009).

In 2011’s New 52 universe, Bane returned to the use of Venom and made further attempts to gain power in Gotham. He even mixed Venom with a form of Scarecrow’s fear toxin in order to eliminate any fear in himself. But he was defeated by Batman with an assist from the Flash in 2012’s BATMAN: THE DARK KNIGHT #7.

In BATMAN ETERNAL (2014-2015), Bane escaped Arkham Asylum. Poison Ivy used her chemistry skills to improve his Venom. In the process, he fell in love with Ivy (a common occurrence due to the chemical manipulations she uses on others). He was later enraged when he realized he’d been manipulated.

During The Joker’s “Endgame” scheme in 2014-2015’s BATMAN #35-40, the villain’s toxin was unleashed on Arkham Asylum’s inmates. But Bane found himself immune due to his repeated exposure to Venom. Not wishing The Joker to destroy the city, Bane aided Batman in holding off a mob afflicted with the toxin. At the end of “Endgame,” Batman was believed to have been killed along with The Joker. Bane then returned to Santa Prisca, determined to conquer the prison that was once his home and turn it into a power base. 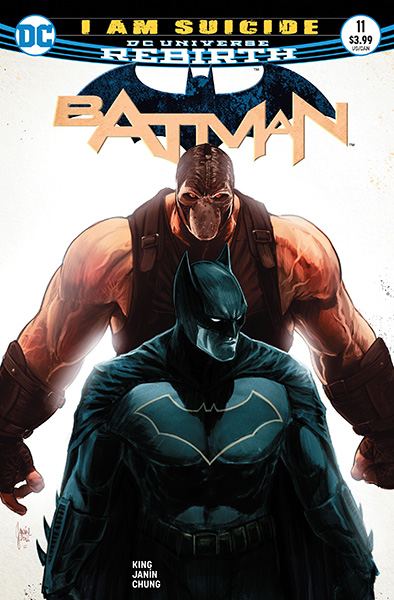 In DC’s Rebirth, Batman encountered Bane once more in “I Am Suicide” (in 2016-2017’s BATMAN #9-13). By this point, Bane controlled a large portion of Santa Prisca, with Peña Duro his fortress. To control his addiction, he briefly employed the mind manipulator known as the Psycho-Pirate. Eventually, Bane led his original gang of henchmen on a mission to Gotham to break Batman once again. But the Dark Knight took a page from Bane’s “Knightfall” playbook and unleashed the Arkham inmates on the villain before defeating him in combat (in 2017’s BATMAN #19-20).