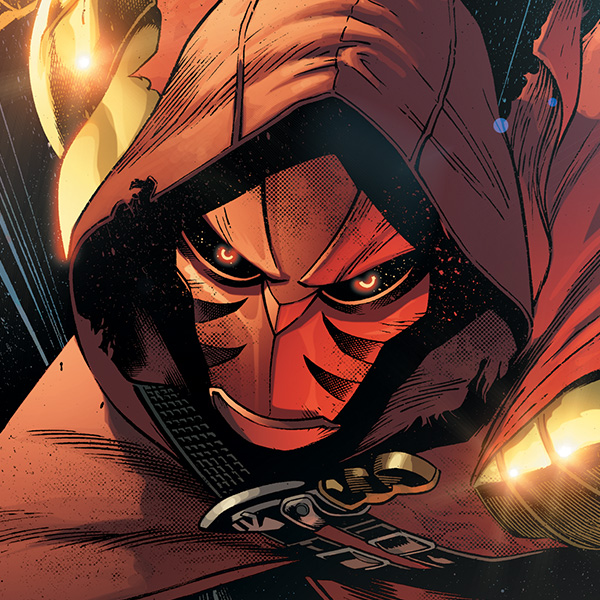 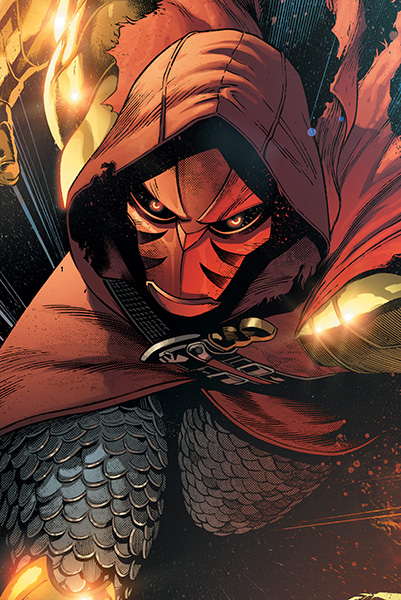 Batman's one-time successor, until his bloodthirst cost him the mantle, Azrael has since emerged as an ally of the Bat.

Batman's one-time successor, until his bloodthirst cost him the mantle, Azrael has since emerged as an ally of the Bat.

Jean-Paul Valley thought he was a simple computer science student until his father’s deathbed revelation that he was the descendant of a long line of assassins, all of which took on the mysterious identity of Azrael. Created by a sect of corrupt Templars called the Sacred Order of Saint Dumas, Azrael acts as the Order’s “Angel of Death.” The Order programmed Jean-Paul since birth to be their master assassin. But when given the chance to become a hero by the Batman, Azrael chose to follow a better path, and became an “Agent of the Bat," working to use his skills for the greater good. This led Batman to trust him to fill his boots when he was crippled by Bane.

The programming of the Sacred Order of Saint Dumas, the pressure of being Batman, and Valley’s own inexperience as a crime fighter all led to a violent, unhinged Batman patrolling the streets of Gotham until Bruce Wayne could take back his mantle. Not so weak to be a puppet of the Order, but not strong enough to be the Batman, Jean-Paul Valley found himself caught between two worlds. Choosing to be the hero Azrael, Valley searches for answers from the Sacred Order of Saint Dumas while also protecting the citizens of Gotham City as a member of the extended Batman family. 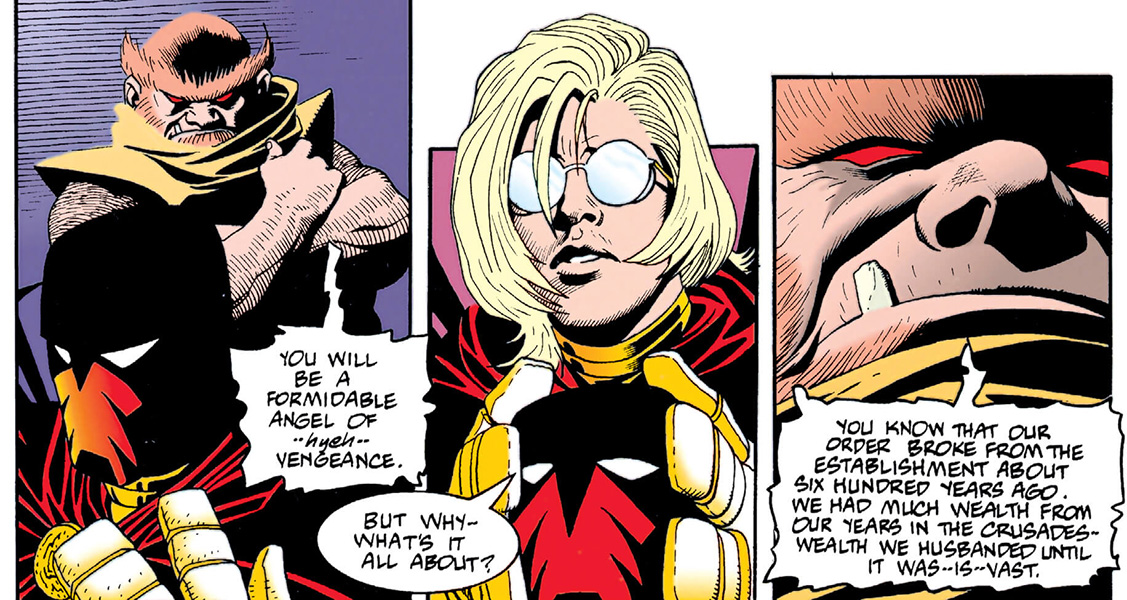 After his father was shot, Jean-Paul Valley discovered he was a descendant of generations of assassins that go by the name Azrael. Genetically engineered and programmed since before his birth to be a master assassin at the hands of the Sacred Order of Saint Dumas, Jean-Paul assumed the role of “The Angel of Death”.

On his first mission for the Order, Azrael is sent to kill a member who has gone rogue, a weapons dealer named Carleton LeHah. LeHah had also found his way into the sights of Batman, who uncharacteristically was captured by the gun runner. Working with Alfred Pennyworth, Valley was able to track down LeHah and Batman both. After saving the Caped Crusader from the former Order member, Azrael rejects their ways and chooses to follow the moral example of Batman.

Upon returning to Gotham City, Azrael is put into training with Robin, but finds his Saint Dumas programming isn’t so easily forgotten, as he continues to use extreme methods in his pursuit of justice. While Azrael trains to be a vigilante under the Dark Knight, Bane unleashes the occupants of Arkham Asylum on the city, wearing down Batman to the point of exhaustion. When Bane is able to defeat Batman in combat, it falls to Jean-Paul Valley to fill the role of Batman in Bruce Wayne’s stead.

Unprepared for being Batman, Valley’s first forays as the Dark Knight end in disaster. Humiliated, Jean-Paul’s programming starts to take over and the unbalanced hero leans into more violent and harsh methods. Finding success in these methods, Valley starts to believe himself to be the superior Batman, until he goes too far by allowing both a villain and an innocent bystander to die.

When Bruce Wayne returns to reclaim his legacy, Valley is unwilling to surrender the role of Batman. By using his wits to outsmart Jean-Paul, Batman is able to breakthrough Valley’s fractured mind and talk sense into the misguided hero. Valley relinquishes being Batman and returns to his role as Azrael, though Batman soon gives him a new mission to track down The Sacred Order of Saint Dumas and learn the truth about his own past.

Over time, Azrael would disassemble The Sacred Order of Saint Dumas and find himself squaring off against Biis, his father’s killer - Carleton LeHah. Acting as an “Agent of the Bat”, Azrael was instrumental in stopping the “The Clench” virus during the Contagion saga. After Contagion and the following Cataclysm, Azrael also helped manage Batman’s territories during the time when an earthquake caused Gotham to become “The No Man’s Land,” until he was sent on a mission to save a Senator. On this mission he came to blows with a new arch nemesis masquerading as Azrael named Scratch. Scratch and Biis would eventually partner to end Azrael, and though he’d better them in battle, Jean-Paul Valley apparently paid the ultimate price and lost his life in the fight.

During the Battle for the Cowl, during a time when Batman vanished and various protéges fought each other for the right to replace him, an organization called The Order of Purity recruits a former police officer named Michael Washington Lane to be their version of Azrael. Recruited to stop the Sacred Order of Saint Dumas’ latest Azrael who has lost his mind, Lane is given armor called The Suit of Sorrows along with two blades, The Sword of Sin and The Sword of Salvation to stop the Order’s Mad Assassin.

In the post-Rebirth reality, Jean-Paul Valley is once again the wielder of Azrael’s fiery blades. In this incarnation, Azrael’s abilities are tied more closely to his battle armor, The Suit of Sorrows. Acting as an assassin for “Mother,” the leader of The Sacred Order of Saint Dumas, Azrael wiped out black market tech dealers to acquire their innovations for the Order’s gain. Bane, Robin, and Red Hood encounter Azrael when they try to find the headquarters of The Order. While Azrael defeats Bane, he learns about his own history and manipulation at the hands of Mother. When the Order uses the tech Azrael had acquired to take over the world, Azrael turns on his masters and partners with Nightwing to take Mother down.

When the Bat-family next encounters Azrael in Gotham, he’s on the run from soldiers from the paramilitary organization The Colony. After freeing him from the Colony, he accepts Batman’s offer to join his growing team of vigilantes. When Luke Fox and Jean-Paul Valley begin to research the A.I. that drives the functionality of the Suit of Sorrows the AI transfers itself into a new body and takes on the form of Ascalon. In an effort to purge the more homicidal aspects of the A.I. from Azrael’s armor, Luke Fox adds an additional A.I. to the system modeled after Batman’s behavior patterns.

When the Source Wall is destroyed, Azrael begins hearing a new voice in his head calling him to the depths of outer space. He joins a team of heroes on a quest through the Ghost Sector, a newly established section of space that is home to the planets freed at the end of Justice League: No Justice. Joining Azrael on this cosmic quest are Cyborg, Starfire, Green Lantern Jessica Cruz and a newly reborn Darkseid.

Though he was unaware of it for most of his life, Jean-Paul Valley was genetically engineered with animal DNA and has enhanced stamina, strength, senses and accelerated healing. His mental conditioning through “The System” make him an expertly trained martial artist, but further training from Batman has groomed him into a formidable combatant. Azrael’s traditional weapon of choice is two flaming daggers that extend from his gauntlets, but he has also used a flaming sword. An elegant weapon for a more civilized age.

The A.I. powered Suit of Sorrows acts as an advanced predictive operating system in battle. Giving Jean-Paul insight into where and when to strike an opponent, the suit enhances Jean-Paul’s already heightened and conditioned reflexes. Recently, the “Azrael” A.I. has been expunged and replaced with a Batman A.I., modeled after the best qualities of Bruce Wayne himself. 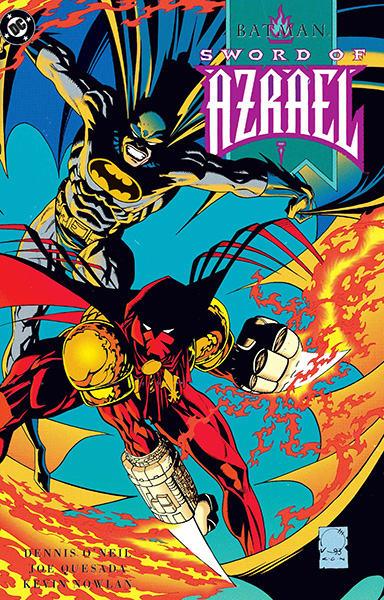 In his first appearance, Jean-Paul Valley discovers there is a sleeper assassin in his own brain called Azrael. Activated when united with his armor, Azrael serves the Sacred Order of Saint Dumas. The previous Azrael, Jean-Paul’s father Ludovic Valley, revealed that he had been programming his son to fill the role since birth. Thanks to “The System”, Jean-Paul knows all the right moves to be lethal, but his body isn’t quite where it needs to be and he begins training with Order member Nomoz to become Azrael. 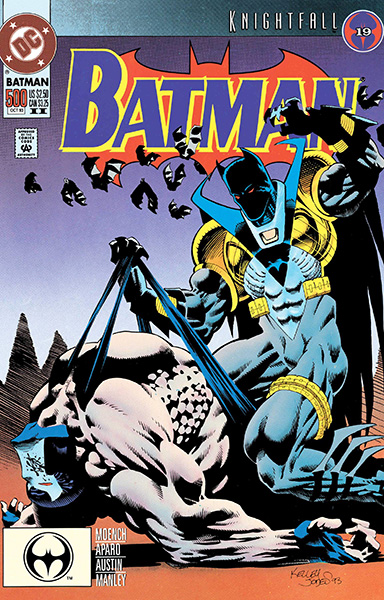 After Bane releases the inmates of Arkham Asylum into the streets of Gotham City, Azrael is forced to step up from trainee to fully-fledged agent of Batman to help bring in the criminals at large. While Azrael suffers some defeats at the hands of Killer Croc, he ultimately proves capable of being Batman’s equal in the field. When Bane is able to wear down Batman to the point he is weak enough to be broken, Jean-Paul is tasked with stepping in to serve as the new Dark Knight. 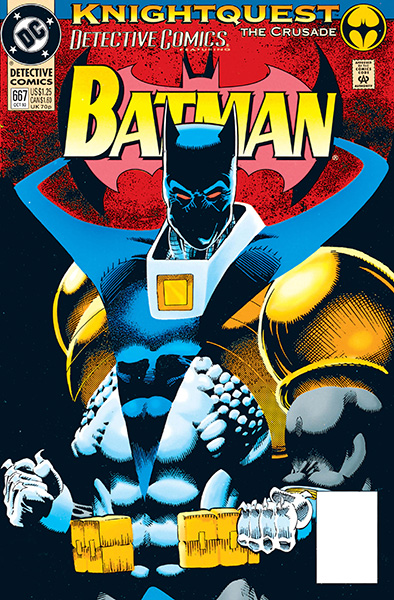 Once he takes on the mantle of Batman, Jean-Paul Valley’s programming kicks in and an unrelenting, dangerous Batman hits the streets of Gotham. Dispatching criminals and thugs without mercy, Valley’s allies are alarmed and try to remind him what it means to be Batman. This new amalgamation of Azrael and Batman has no time for such niceties and operates with little regard for the lines that played such a pivotal role in defining how far Batman would go. Az-Bats would do what Batman couldn’t and stop Bane. Creating new armor, gauntlets and gadgets, Jean-Paul Valley’s Batman would use a deadly arsenal to bring crime in Gotham City under his merciless control. 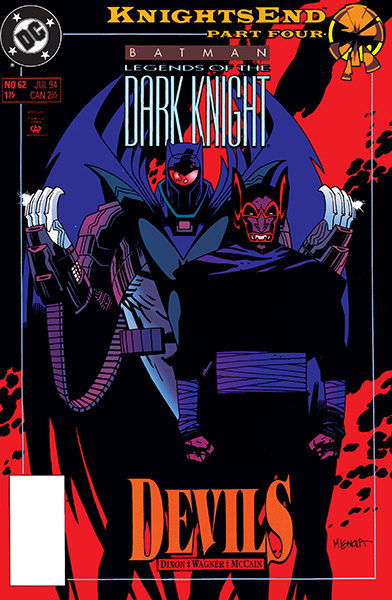 When Jean-Paul Valley goes too far and allows a victim to die with the criminal he was trying to apprehend, Bruce Wayne knows he has to become Batman once again. But when Jean-Paul won’t relinquish the cowl, Wayne must use his wits and will to breakthrough Azrael’s madness and show the unhinged hero the light. Literally. 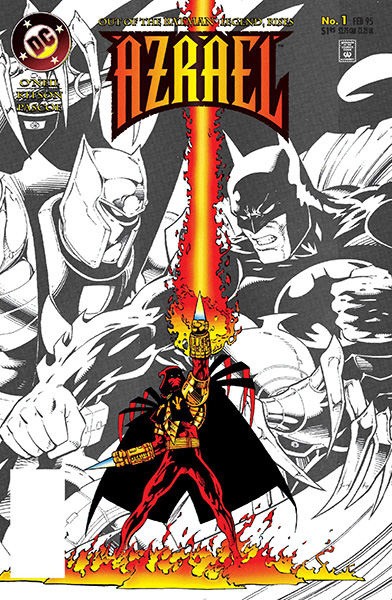 Knowing he couldn’t handle the burden of being Batman, but not willing to give up on making himself a better hero, Jean-Paul Valley pursues answers on what the legacy of Azrael truly is in this story, the first in his own ongoing series, which would last 100 issues. With the blessing and support of Batman, Azrael sets to the task of dismantling the Sacred Order of Saint Dumas and bringing justice to those that had been wronged by their evil.

As Mother pulls his strings, Azrael works as an agent of the Sacred Order of Saint Dumas in its efforts to acquire advanced technology for nefarious purposes. Red Hood and Red Robin track the angelic assassin to Santa Prisca, and you know when Santa Prisca is involved, Bane is sure to follow. 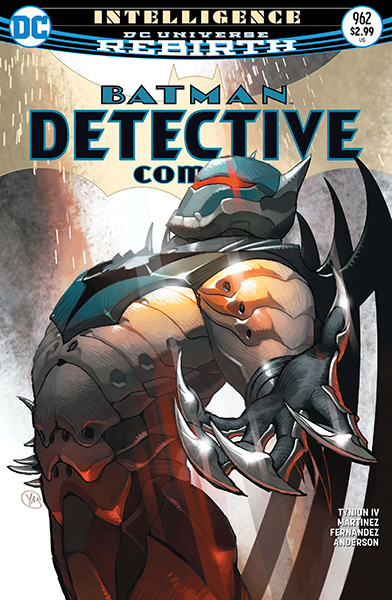 The latest incarnation of Azrael reveals the Angel of Death’s divine power is actually rooted in ancient artificial intelligence. When that A.I. gains freedom from its human host outside of The Suit of Sorrows, it takes the majority of the Bat-family’s strength and ingenuity to free Azrael from the grip of madness. Joining the team of bat sponsored vigilantes, Azrael is given a new A.I. based on Batman’s personality to replace the homicidal nature of the previous programming. After Batwing is able to get him on his feet, Azrael’s new armor harkens back to AzBats’ Knightquest era.