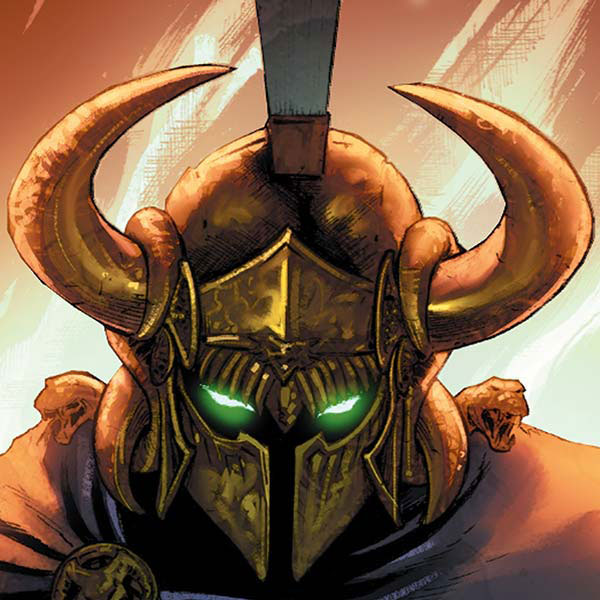 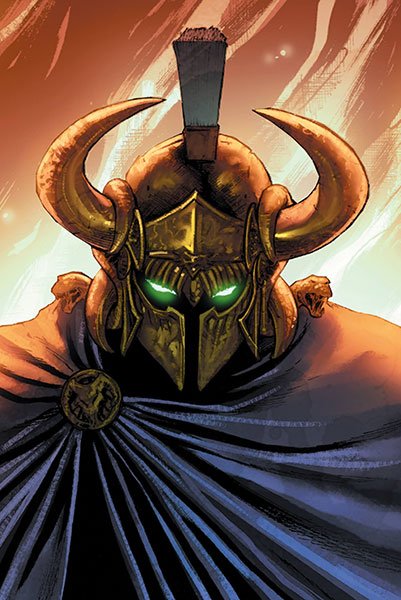 He's worn many faces and borne many names, but throughout history, Ares, the Greek God of war, has possessed a limitless hunger for destruction.

He's worn many faces and borne many names, but throughout history, Ares, the Greek God of war, has possessed a limitless hunger for destruction.

An immortal being who draws his power from belief and conflict, Ares was worshipped by many on Earth as a god of Olympus. Eventually that belief waned and the gods stepped back from regularly interfering with humanity. But, centuries later, Ares returned to encourage war through his manipulation of mortals. This brought him into conflict with the Amazons and their champion, Wonder Woman. Over the years, he became the latter’s constant foe, intent on thwarting her mission of peace and understanding.

In recent years, however, Wonder Woman has learned that the being she fought so many times was not the real Ares. And now that the true God of War has been revealed, it’s uncertain what side he’ll be on in battles yet to come.

In Wonder Woman’s early stories in the 1940s, Ares was referred to by his Roman name, Mars (WONDER WOMAN vol. 1 #1, 1942). Introduced as the God of War, he stood in direct opposition to the peaceful Amazons and the goddesses who protected them, such as Aphrodite. Mars led an army of men against the Amazons and was defeated.

Centuries later, he established his headquarters on the planet of Mars, recruiting and enslaving spirits of the dead in War Factories and Lie Factories, overseen by his deputies Lord Conquest, Earl of Greed, General Destruction and the Duke of Deception. He and his deputies fought Wonder Woman and tried to ensure the Allies lost World War II (WONDER WOMAN vol. 1 #2-3, 1942). 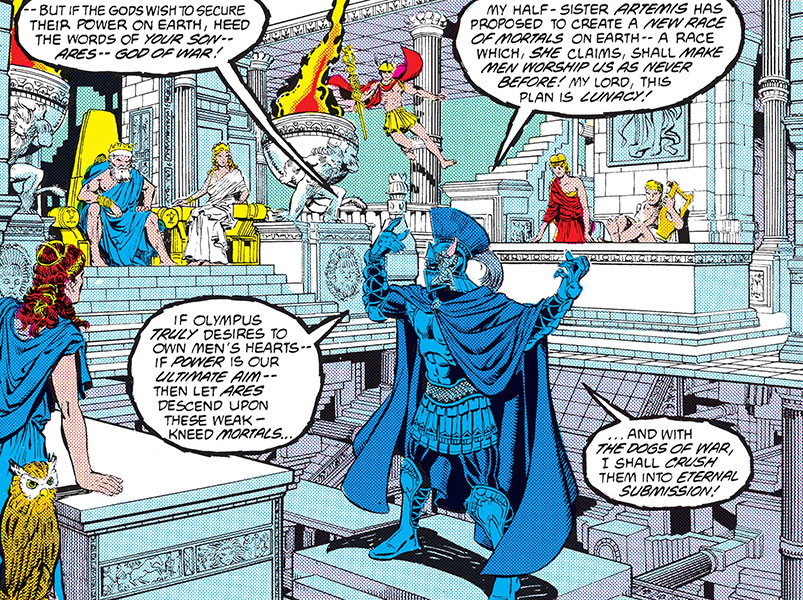 After 1985’s CRISIS ON INFINITE EARTHS rebooted the DC Universe, it was explained that Olympus and Hades were other-dimensional realms connected to Earth. Beings of these realms could draw power from human emotions, belief and interaction. Appearing before humans in Ancient Greece and Rome, they were taken for gods and worshipped accordingly. Ares, who learned he could draw power from conflict and open aggression, became known as the God of War. He considered some of the other Olympians his natural enemies since they preferred to guide and nurture humanity. Likewise, he opposed the creation of the Amazons, who would be warriors and teachers dedicated to peace (WONDER WOMAN vol. 2 #1, 1987).

The Olympians stepped aside from regularly involving themselves in human affairs, particularly as their power was now fed by fewer worshippers—though the nation of Atlantis and the Amazons of the island Themyscira still believed in the gods and respected their authority. Ares was forced to follow Zeus’ decree that he not directly interfere with humans, but was determined to regain his power. In the modern day, he attempted to do this by manipulating human agents into provoking World War III. He was thwarted by Wonder Woman (WONDER WOMAN vol. 2 #1-6, 1987).

At the end of their first meeting, Diana pointed out that a nuclear war would destroy most if not all of humanity and then Ares would lose power without enough people to worship him and provide conflict. Ares conceded the point and charged Diana with the task of saving humanity from its own aggression. Following this, he returned at various times to incite more violence and conflict, as a way to maintain power and to test humanity’s worthiness and Diana’s resolve. Likewise, his children Phobos, Deimos and Lord Lycus have all fought Diana over the years. 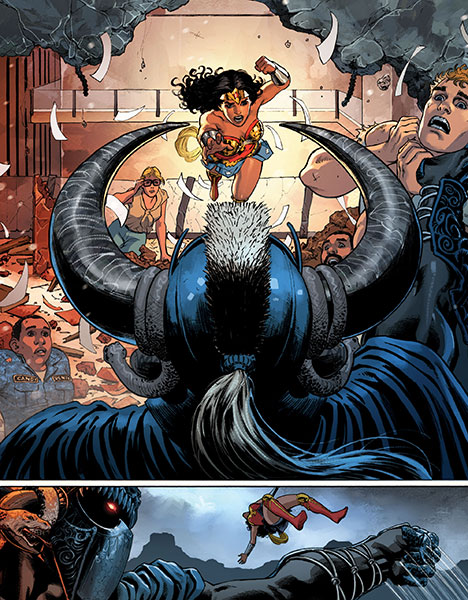 As a god of Olympus, Ares’ powers aren’t fully defined. They wax and wane depending on human belief and the amount of conflict that exists on Earth. As an immortal, he is untouched by age and disease, but can be killed. He can’t be hurt by conventional Earth weaponry, but he can be harmed by sufficient force and by magic.

Ares can take on different appearances and bond with a human host. He can also increase in size, strength and mass at will when conflict is abundant or nearby. In his earlier comic book appearances as Mars, and once again when he became Lord of the Underworld for a time, he could also summon and control the spirits of the dead.

Ares can project his image and voice across great distances. He can also show images of what is occurring in other places that he is able to perceive. He can sense conflict in people, as well as their potential for aggression, but he can’t read thoughts. If he takes direct control of people, they often quickly show signs of this possession, such as decay.

Ares can summon fire, darkness and energy blasts, as well as any Earth-made weapon. 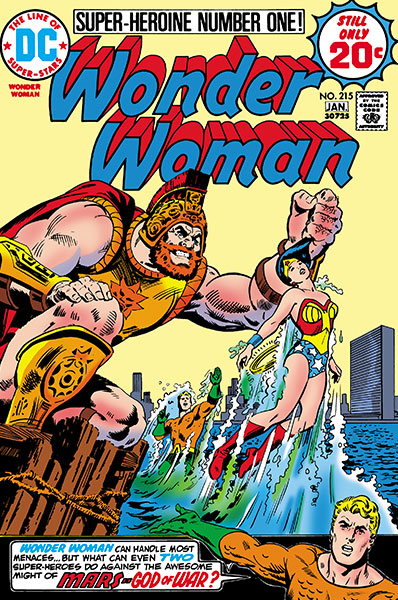 In the Pre-Crisis version of the DC Universe, Ares (as Mars) attempted to provoke a war between the Amazons and the people of Atlantis (WONDER WOMAN vol. 1 #215, 1975). He also recruited a woman named Helena Alexandros to become the warrior called Silver Swan in order to destroy Wonder Woman and murder the President of the United States. He claimed that Helena was his descendant via Helen of Sparta many centuries before (WONDER WOMAN vol. 1 #288, 1982). Both of these efforts failed.

Years after his first encounter with Diana, Ares decided to return to Earth and provoke conflict yet again. Unable to break Zeus’ decree that he not interfere directly, he bargained with a criminal, Ari Buchanan, who agreed to be his human host. The two became Ares Buchanan (introduced in WONDER WOMAN vol. 2 #77, 1993), who, over time, grew to become a formidable crime lord and arms dealer. He used technology from S.T.A.R. Labs to outfit various criminals with advanced weaponry, and his power became great enough that Assistant District Attorney Donna Milton concluded he would never face consequences from the law. She then left her job to become his personal attorney. The two became lovers, and Donna volunteered to go “undercover”—befriending Wonder Woman and acting as Ares’ agent to influence and manipulate her actions (WONDER WOMAN vol. 2 #82, 1994).

Donna Milton became pregnant. Ares initially believed this was a ruse in order to garner Wonder Woman’s sympathy. But soon after revealing his true nature to Diana, he learned that Donna was indeed pregnant with his child. Not caring to have an heir, Ares shot Donna and left her for dead, but she and her baby, Lyta, born that same night, survived. Donna remained Diana’s friend and became her new lawyer (WONDER WOMAN vol. 2 #83-84, 1994). Later, Diana and Ares learned that Donna Milton had actually been the corrupt sorceress Circe, who’d used magic to adopt a new identity (WONDER WOMAN vol. 2 #100, 1995).

As time went on, Ares and the other gods of Olympus realized their power levels were shifting due to the different beliefs and values held by modern humanity. Some of them adapted to the new age. Yet Ares again decided to focus on manipulating the Amazons and the inhabitants of Olympus. He provoked conflict and events that led to Themyscira’s devastation (WONDER WOMAN vol. 2 #200, 2004). Soon afterward, Athena assumed leadership of Olympus, and Ares killed Hades, taking the realm of the Underworld for his own (WONDER WOMAN vol. 2 #212-217, 2005). Around this time, he also took an interest in (and granted greater power to) Cassie Sandsmark, a daughter of Zeus who’d become the second hero called Wonder Girl.

Rise of the Olympian

Sometime later, Ares manipulated the villains Dr. Barbara Minerva, a.k.a. the Cheetah, and Dr. T.O. Morrow into creating an anti-Wonder Woman from Diana’s own body (retrieved from a possible future timeline in which she died) and the soil from places where genocide had occurred. This warrior homunculus, called Genocide, became a fearsome enemy to Diana (WONDER WOMAN vol. 3 #26, 2009).

When Diana destroyed Genocide, Ares retaliated, sending vicious monsters to attack the Amazons. Rather than see the conflict continue and get any of her fellow Amazons caught up in it, Diana confronted Ares directly and this time killed him rather than try to reason or negotiate for peace yet again. Though she mourned him and felt conflicted about her decision, Zeus assured her it was the right one (WONDER WOMAN vol. 3 #26-33, 2009). 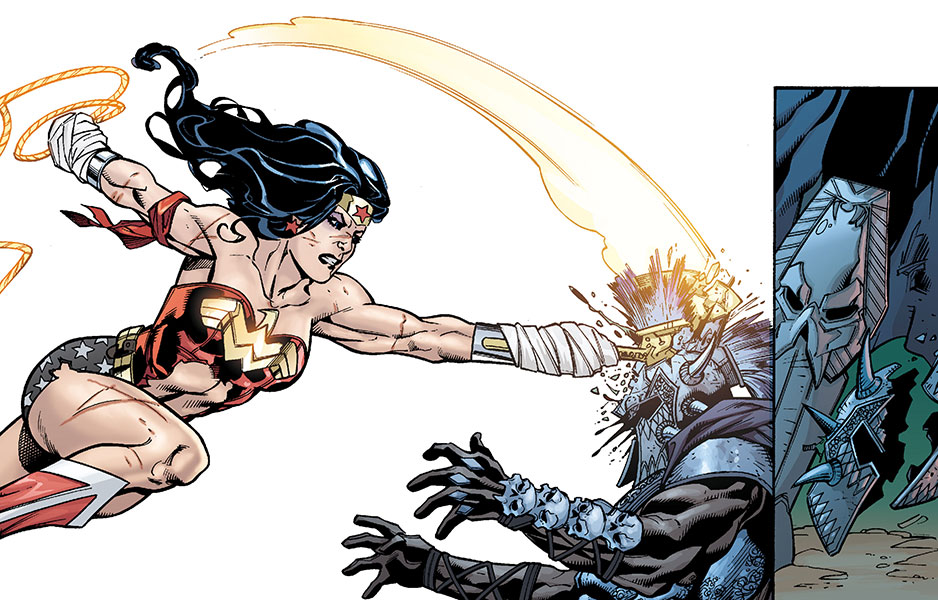 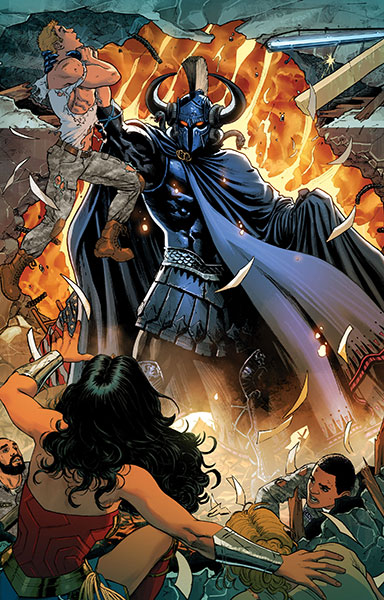 Following the events of 2011’s Flashpoint, Diana’s history was changed so that she was a child of Zeus. Thus, Ares looked on her somewhat protectively, as a brother. When she was a child, Ares trained her to become the fiercest warrior of the Amazons, but was disappointed that she believed in mercy (WONDER WOMAN vol. 4 #0, 2012). When they met years later, Ares had become a tired and cynical old god. Events then led to Diana being forced to kill Ares, at which point the god forgave her for their differences and announced that she was the new God of War.

With 2016’s DC Rebirth, a new history has been written for Diana and some of her pre-New 52 history has been restored. Diana had memories of the New 52 events, but realized these were “lies” that had been planted in her mind in order to steer her away from Themyscira (WONDER WOMAN: REBIRTH #1, 2016).

As before, Diana’s first true battle against the forces of evil was against Ares, who tried to provoke worldwide war through human agents (in this case, a terrorist organization called Sear). But, years later, Diana discovered that the Ares she’d fought throughout her career was actually his children in disguise. The real Ares, initially opposed to Aphrodite, fell in love with her, which cooled his need for war and conflict. He remained a prisoner on Themyscira for centuries and seemed content to remain there (WONDER WOMAN vol. 5 #21-23, 2017). Whether this is the whole truth remains to be seen. For as Diana herself has realized, “Truth is the first casualty of war.”