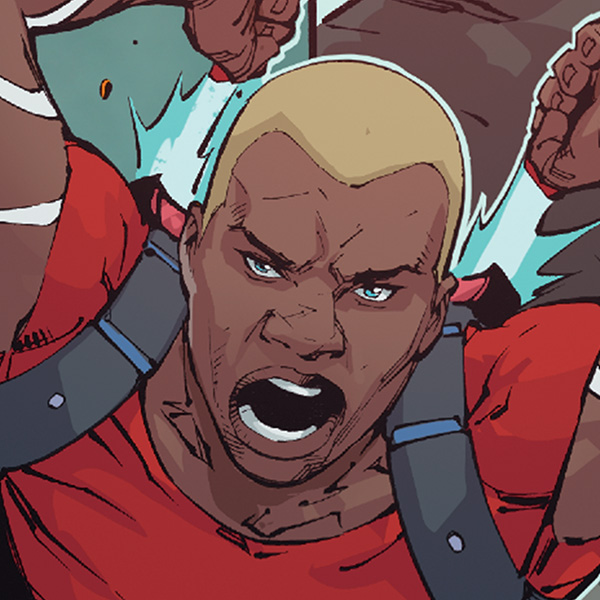 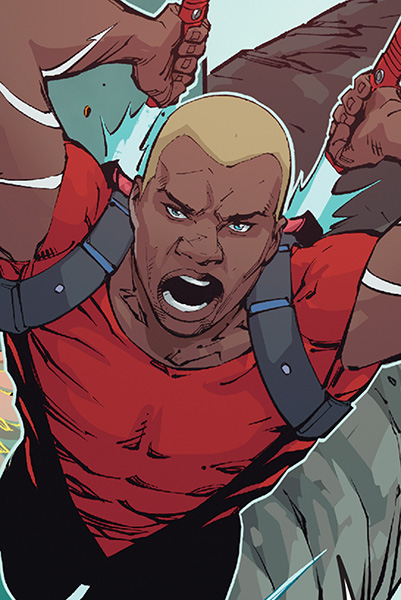 Jackson Hyde may have been taught by Aquaman himself, but the looming threat of his father, Black Manta, is never far from his mind.

Jackson Hyde may have been taught by Aquaman himself, but the looming threat of his father, Black Manta, is never far from his mind.

A natural born leader and level-headed team player, Kaldur'ahm has had multiple incarnations across both comics and animation, but certain things remain the same. He's an Atlantean/Human hybrid much like Aquaman himself, with the power to control and form water into solid constructs and he was raised not knowing who his real parents were -- something that, it turns out, may have been for the better, considering his biological father turned out to be the evil Black Manta, sworn enemy of Aquaman.

Pulled between not only the worlds of the land and sea, but between good and evil itself, Kaldur, or Jackson Hyde as he's known by his adoptive human parents, has striven to make sure his legacy does not define him. And, though that sometimes pushes him to the very brink of what he believes himself to be capable of, he has proven himself to be a Super Hero. 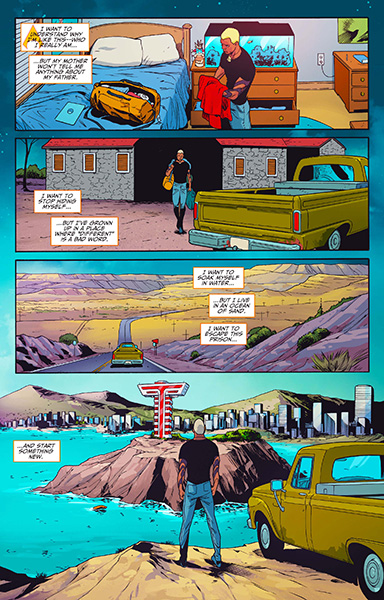 Growing up, Jackson Hyde was never told who or what he was. It wasn't that his parents -- his adoptive parents, that is -- meant to hurt him. They were only trying to keep him safe. Instilled with an intense fear of water from a young age, Jackson didn't learn the truth until he was into his teenage years; that he wasn't a human at all, but an Atlantean boy with hydrokinetic powers.

Jackson eventually began honing his skills using what water he could find in his arid New Mexico hometown, from fishbowls to water bottles, before finally stepping up to help the Teen Titans during one of their more water-based missions in San Francisco bay. 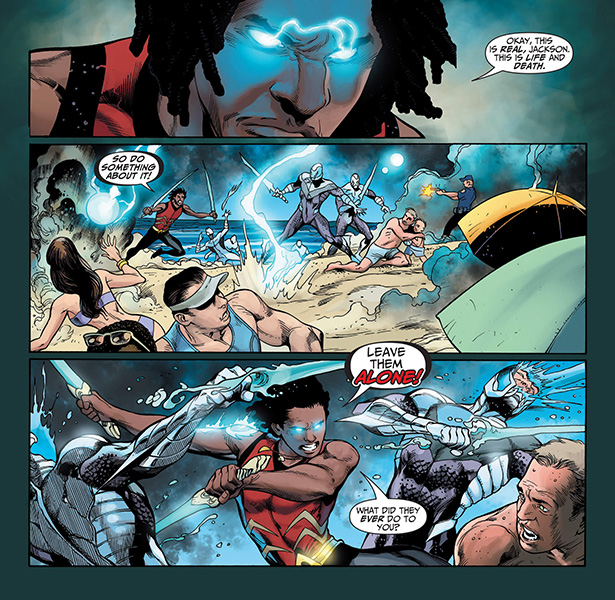 As an Atlantean hybrid, Jackson possesses superhuman strength and endurance, as well as the ability to breathe underwater and swim and tremendous speeds. He is hydrokinetic, meaning he can telepathically manipulate water into solid constructs.

In some incarnations, Jackson's hands are webbed and his eyes begin to glow when his abilities are activated. 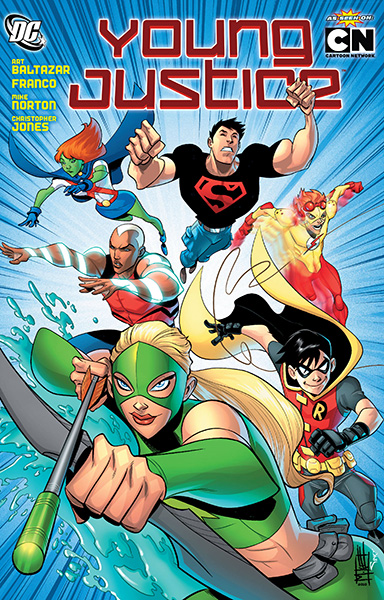 The version of Kaldur in the YOUNG JUSTICE universe differs slightly from his comic-book counterpart. Instead of being raised in secret in New Mexico by human parents, Kaldur was raised in Atlantis where he was trained to fight and hone his skills.

He was chosen by Aquaman himself to become his protege, journeying to the surface and taking on the codename Aqualad as he trained to become a Super Hero. During his training, he met Dick Grayson and Wally West, who he eventually came to know as teammates. The trio formed Young Justice and began acting as a sort of junior-level Justice League under the watchful eyes of their mentors, rapidly expanding their ranks and testing their abilities. Kaldur, thanks to his level head and quick decision making, was named the team's first official leader.

Following the five year time jump between seasons one and two, Kaldur was revealed to have "betrayed" the team and gone to work with the man he learned to be his real father: Black Manta. In truth, Kaldur had gone to work with Manta was part of a deep cover mission known only to his closest friends as the team worked to bring down a mysterious cabal of unknown enemies known only as The Light.

The reality of Kaldur's position and allegiance were eventually made clear and the Light -- along with their partner, The Reach -- were defeated, but not until Wally West, one of Kaldur's close friends and original teammates, sacrificed himself.

Two years later, Aquaman retires from active superhero duty to govern Atlantis. Season 3 of YOUNG JUSTICE begins by introducing Kaldur as both the new Aquaman and chairman of the Justice League. Secretly, Kaldur is one of a small number of heroes to work with Batman’s covert teams in order to manipulate public opinion against Lex Luthor and the wider machinations of The Light. Eventually, Kaldur and the others in the “Anti-Light” team see the error in keeping the rest of their colleagues in the dark, and for his actions Kaldur steps down as chairman — recommending Black Lightning as his successor. 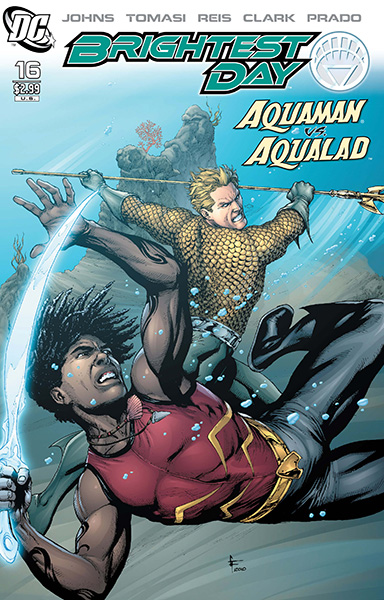 Following his introduction in 2010, teenager Jackson Hyde was revealed to have been instilled with a massive fear of water by his adoptive parents. It was later revealed that this fear had been born of their desire to keep Atlantean parents from locating him -- or, rather, the Atlanteans hired by his true father, Black Manta. Once Jackson learned the truth, he was almost immediately pulled into the events of 2010-2011's BRIGHTEST DAY, when he learned to use his innate, water-based abilities to help defend his adopted parents from Manta and his squad of hunters lead by Siren.

During the conflict, Jackson met Aquaman for the first time, which serves to uncover more of his past. Jackson was given a set of armor and weapons, known as "Water Bearers" to help control his abilities, by Mera, which he used to fend of the persistent attacks of Manta and Siren.

After having proven himself more than capable in the fight, Aquaman decided Jackson's best course of action would be to join the Teen Titans (BRIGHTEST DAY, 2010-2011).

An updated incarnation of Jackson was introduced in DC UNIVERSE REBIRTH #1 (2016), which established him as a young boy who had only just begun to realize his abilities. This version of Jackson did end up joining the Teen Titans under the leadership of Damian Wayne, the current Robin, after spending some time trying to learn to control his hydrokinetic powers on his own. Unfortunately, joining the Teen Titans also alerted his father, Black Manta, to his existence (TEEN TITANS #7, 2016).

Jackson remained with the team until they were evicted from their base of operations in 2017's TEEN TITANS #17. With nowhere else to go, Jackson traveled to Amnesty Bay, seeking Aquaman himself for guidance in 2019’s AQUAMAN #50. As his begrudging mentor, Aquaman has found himself teaching young Jackson Hyde the finer points and responsibilities of being his own hero.