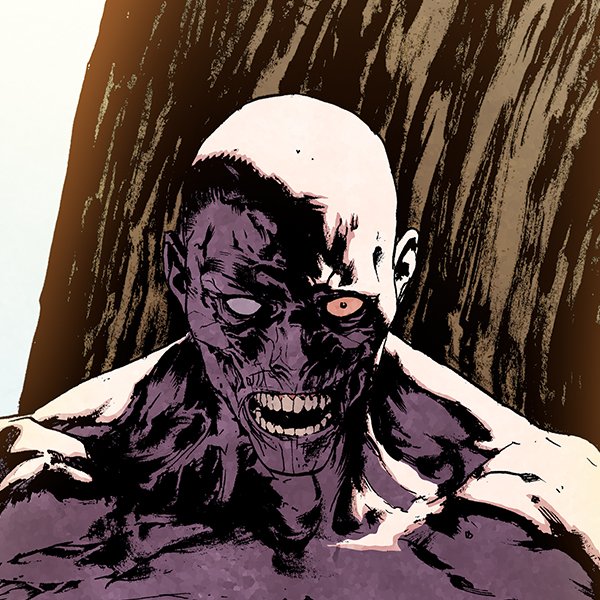 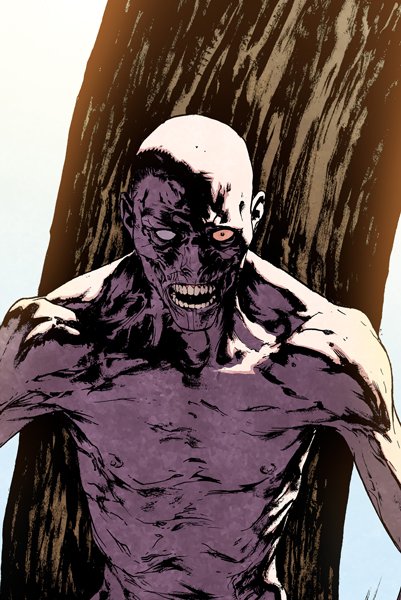 As an expert on forbidden science and dark magic, Swamp Thing’s arch-nemesis has always sought mastery over death… a quest which led him to become its avatar.

As an expert on forbidden science and dark magic, Swamp Thing’s arch-nemesis has always sought mastery over death… a quest which led him to become its avatar.

The way of all flesh is death and decay. After a lifetime on Earth, that reality is one that all men must reckon with. Unless, apparently, you happen to be Dr. Anton Arcane -- the man who resolved to do something about that pesky problem of death, by any means necessary. By uncovering the secrets of science and magic unknown to all others, and through the development of a very particular brand of sociopathy, Arcane uses everyone and everything available to him in pursuit of his mastery over the inevitability of death. A fool’s errand? Perhaps. And yet, despite Arcane’s many fatal encounters with his nemesis the Swamp Thing, he always manages to find a way back. 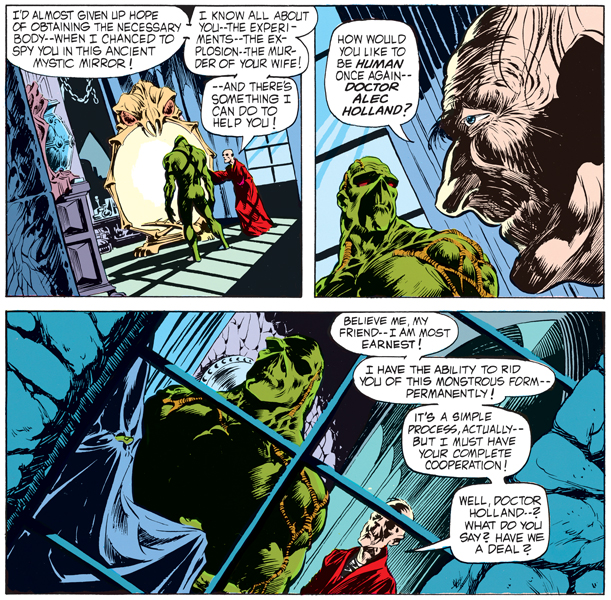 Anton Arcane was born the younger brother of House Arcane, an old money family in the Carpathian mountain region of Romania once known as Transylvania — a family with an ancient occult history as practitioners of the dark arts. A man of equally dark ambitions, Anton sought only the goal of his family’s bloodline of putting an end to mortality itself. But to accomplish this, Anton needed full control of his family’s resources. Jealous of his brother Grigori’s prestige and power, as well as his beautiful wife Anise, Anton had Anise framed for the crime of witchcraft, and she was burned at the stake before the eyes of Grigori and Anise’s young daughter, Abigail.

With Anise’s death, the courts awarded Grigori and Anton shared custody of Abigail, until Grigori too perished under suspicious circumstances. Anton spent many years using and abusing Abby (as well as her late father) as a test subject for his pursuits to bypass death, and even sought to train her as his own apprentice. While Arcane was successful in creating facsimiles of life he dubbed “Un-Men,” and even resurrecting his brother as the shambling “Patchwork Man,” true immortality eluded the death-fearing Anton Arcane… until he found new opportunities in the emergence of the Swamp Thing. 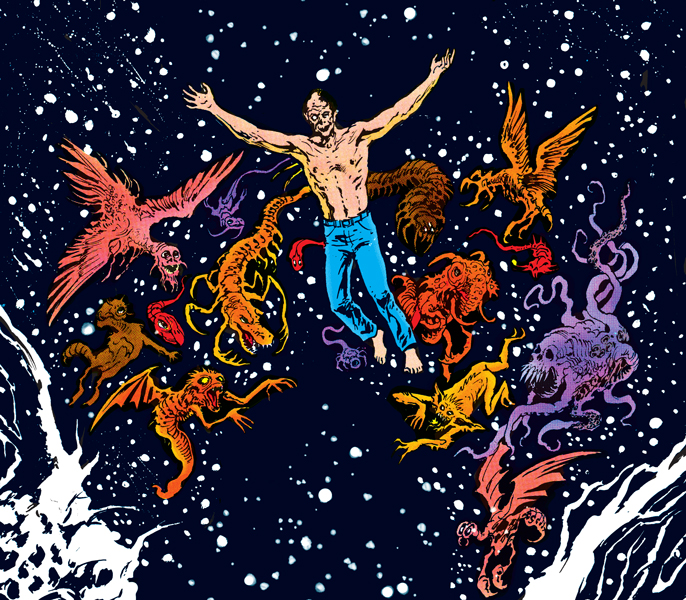 Anton Arcane is a brilliant scientist, a powerful necromancer, and a cunning persuader who can speak to anyone’s greatest desires and use them to pursue his own goals. Through dark magic and technology, Arcane has managed to migrate his own consciousness into new bodies on multiple occasions, taking full advantage of his host’s powers and abilities, adding them to his own prodigious skill and guile.

He has at his disposal an army of “Un-Men,” patchwork humanoid creatures neither dead nor alive which exist only to perform his bidding. At his most powerful, Arcane ascended to become the living Avatar of rot and decay itself, bringing death to all that lived. 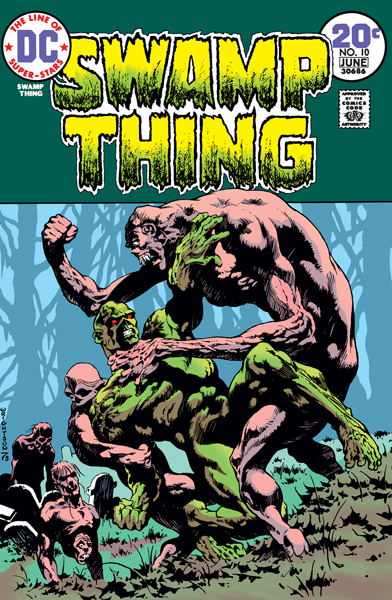 Anton Arcane first made his presence known to Swamp Thing at the lowest point in the creature’s life, when he was still coming to terms with his accursed new form. Arcane saw the desperate creature for what he was, and offered him a way out: a return to the humanity he had lost and now craved. Happily, the Swamp Thing agreed to undergo Arcane’s procedure to reverse his transformation — only to find that Arcane had deceived him. The process would not truly restore the man who was Alec Holland, but doom him to death while Arcane assumed the Swamp Thing’s powerful form. After a battle with Arcane and his blasphemous Un-Men, Holland reclaimed the form of Swamp Thing and sent Anton plunging off the mountaintop vista of Castle Arcane to his death… or so he thought.

Some time later, Arcane returned in a new undead body constructed for him by his own Un-Men as a contingency plan. The undead Arcane sought revenge on Swamp Thing for consigning him to this form, challenging him to battle in a haunted swamp — but the ghosts came to Swamp Thing’s aid, possessing Arcane’s Un-Men and ripping him to shreds. This time, Arcane was truly dead, with his soul consigned to a place in Hell he had thoroughly earned. 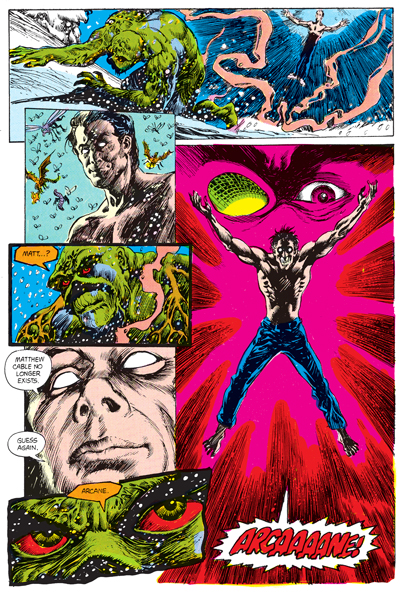 But not even the gates of Hell could contain the will of Anton Arcane. Using his prodigious ingenuity, cunning, and witchcraft, Arcane’s soul passed from the underworld into the realm of the living in the form of a mosquito. Arcane made several failed attempts to regain a human form and enhance his power, though none were successful... until opportunity struck once more as his niece Abigail’s fiancé, Matt Cable, wrecked his car while driving drunk and lay dying. The tiny form of Arcane offered Cable the strength to continue living, in exchange for his agreement to harbor Arcane’s soul within his own body. In desperation, Matt Cable agreed — and found his own latent psychic abilities enhanced exponentially by Arcane’s presence.

It did not take long for Arcane’s indomitable will to overpower Cable’s own, taking full control of his body. By using both their abilities in tandem, Arcane achieved a level of power which allowed him to warp reality around him, bending the world to his will as he continued his abuse of his niece Abby in the form of her lover. Swamp Thing, now in the midst of realizing his destiny as not just a monster, but an elemental being, returned to challenge Arcane in their greatest battle. In the ensuing struggle, Matt Cable managed to reassert control over his body, sacrificing himself to assure Swamp Thing’s victory and Arcane’s death — but not before Arcane could take Abby’s life, consigning her to Hell along with him.

Matt Cable used the last of his power to sacrifice himself for the resurrection of Abby’s body, while Swamp Thing ventured to Hell and back to return her soul — and later took the resurrected Abigail Arcane as his own wife.

Thereafter, Anton Arcane remained consigned to Hell, but managed to carve out a comfortable place for himself in the netherworld by seducing his torturer and becoming a demon himself. Swamp Thing would go on to encounter the demon Arcane a number of times, but the power and true immortality Arcane craved would continue to elude him. 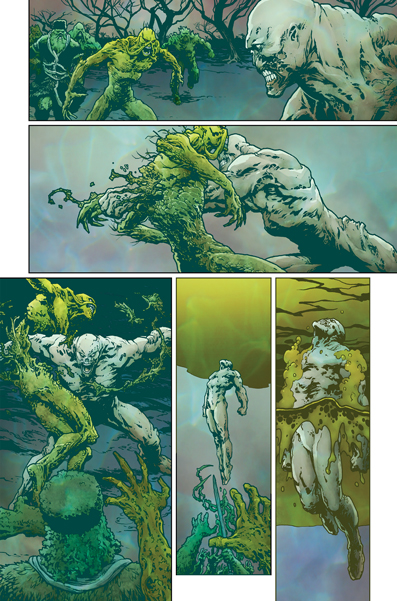 As the New 52 era began, a war began to brew amongst the elemental forces which formed the foundation of reality. The Rot, the elemental plane of death and decay, sought a new champion to oppose Swamp Thing and Animal Man, who championed the living. That champion was found in Anton Arcane, who was summoned from death with a hatred for Swamp Thing rivaled only by The Rot’s own enmity for The Green. To everyone’s horror, The Rot succeeded in their plan to entrap Animal Man and Swamp Thing within The Rot for a year, leaving the world defenseless against Arcane’s campaign to forge a dead Earth which he alone would rule. The dark future of “Rotworld” was undone when Animal Man’s daughter, Maxine, assumes her role as Avatar of The Red and breaks his grasp over the planet, restoring the planet to life.

For his failure, The Parliament of Decay which governs The Rot stripped Arcane of his status, confined him to a deathless void within The Rot, and promoted his one-time apprentice to assume his former role as Avatar: Abigail Arcane.

Forsaken by The Parliament of Decay, the powerless Arcane was later approached by a new elemental kingdom on the rise: The Metal, an elemental plane of artificial life. Arcane arose once more as The Metal’s chosen Avatar, only to be defeated by Abby herself in the climactic battle in the war of the elements. 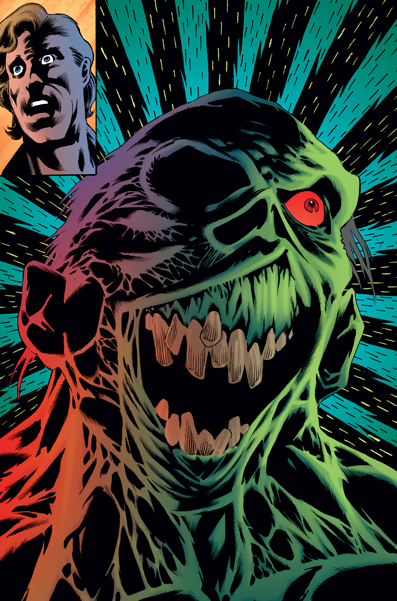 This story by Len Wein, the co-creator of Swamp Thing, returned the character to his roots — largely ignoring the elemental war and Arcane’s return in The New 52. In this story, Arcane returned to life in the form of Matt Cable, who had merely lapsed into a coma after their last encounter in 1984’s SAGA OF THE SWAMP THING #31. Once again at the height of his reality-corrupting powers, Swamp Thing relied upon the assistance of Zatanna, Phantom Stranger, and The Spectre to battle his greatest enemy once more. With the heroes victorious, the hellbound Arcane resumed his torture by a demon he could not influence: the rhymer we know as Etrigan.