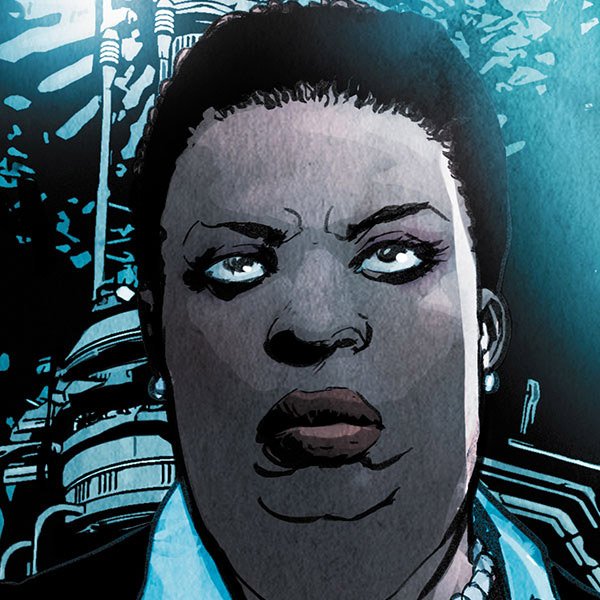 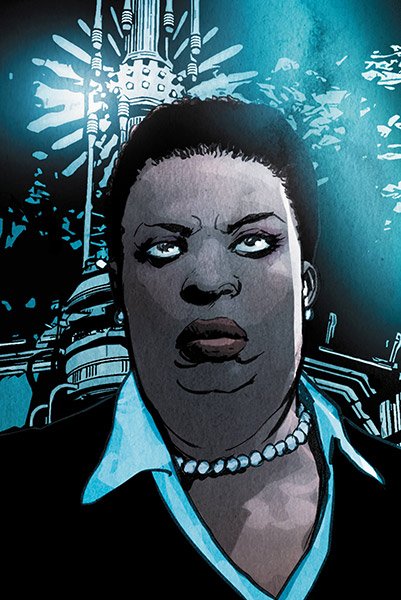 If there's one government bureaucrat who shouldn't be messed with, it's Amanda Waller, founder of the infamous Task Force X, better known as the Suicide Squad.

If there's one government bureaucrat who shouldn't be messed with, it's Amanda Waller, founder of the infamous Task Force X, better known as the Suicide Squad.

After losing her two eldest children and her husband to street criminals, Amanda Waller decided that conventional crime-fighting methods didn’t work, and that someone had to do whatever was necessary to keep the world safe from evil. A tireless tactician and expert political operator, she quickly moved up into the highest levels of government and put together a new version of an old black-ops team called Task Force X. Recruiting incarcerated Super-Villains, her Suicide Squad does the dirty work that heroes like the Justice League can’t or won’t. Regardless of what others think of her methods or morals, Amanda Waller gets the job done.

Amanda Waller is no stranger to pain. Born Amanda Blake in Chicago, she was 18 when she married her 20-year-old boyfriend, Joe Waller. They had five children together. But when their eldest child, Joe Jr., was still in high school, he was murdered by street thugs. Only six months later, her next eldest child, Damita, was kidnapped and murdered—propelling Joe Waller on a path of revenge that ended with him and Damita’s killer shooting each other dead. Having lost so much in such a short time, Amanda Waller vowed to stop evil and protect the innocent at any cost.

After her last child graduated from college, Waller furthered her own education, earning a degree in political science. Working in Washington, D.C., she became a savvy political operator whose tenacity and resistance to compromise earned her the nickname “the Wall.” Eventually, Waller learned about the then-defunct covert unit called Task Force X, created during World War II to deal with strange menaces and super-powered metahuman threats. The field team was composed of troops deemed expendable for one reason or another.

Amanda Waller felt America needed such an organization again, to battle menaces that conventional agencies couldn’t; a team that wouldn’t be held back by the law or the moral hindrances of Super Heroes. Over the next few years, she secretly organized a new Task Force X, without Congressional approval. Waller set up her base of operations in Belle Reve Penitentiary, a Louisiana prison specializing in metahuman containment. For her field team, she recruited Super-Villains who were offered rewards and/or reduced prison time for their crimes in exchange for their service on a “Suicide Squad.” Using villains meant not only sparing good and valuable people from taking risks, but also reduced the chance of morality holding them back. What’s more, if the convicts were caught on an illegal mission, the government would have plausible deniability. Any Squad member who claimed they were working black ops for the U.S. would be deemed another Super-Villain lying to excuse their crimes.

In order to guarantee the villains’ cooperation, each team member was injected with explosives that could be triggered by Waller at any time. Waller could do whatever she believed was needed to protect America, uncovering terrible truths and doing the dirty work so groups like the Justice League wouldn’t have to.

Amanda Waller is a human being native to Earth with no magical ability or evidence of metahuman abilities. She is a highly insightful and intuitive politician, a brilliant military tactician and an expert in espionage and psychological manipulation. She’s skilled in various firearms and won’t hesitate to kill an enemy who gets in her way. 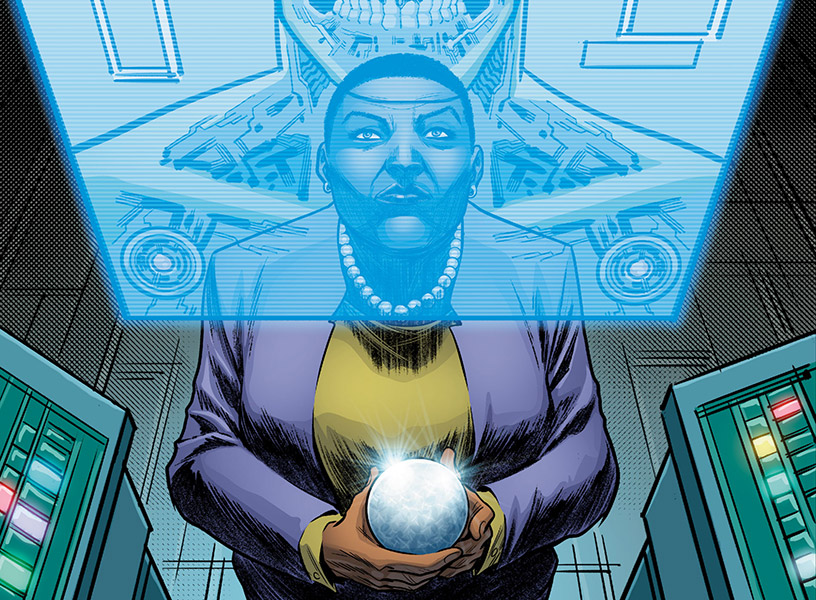 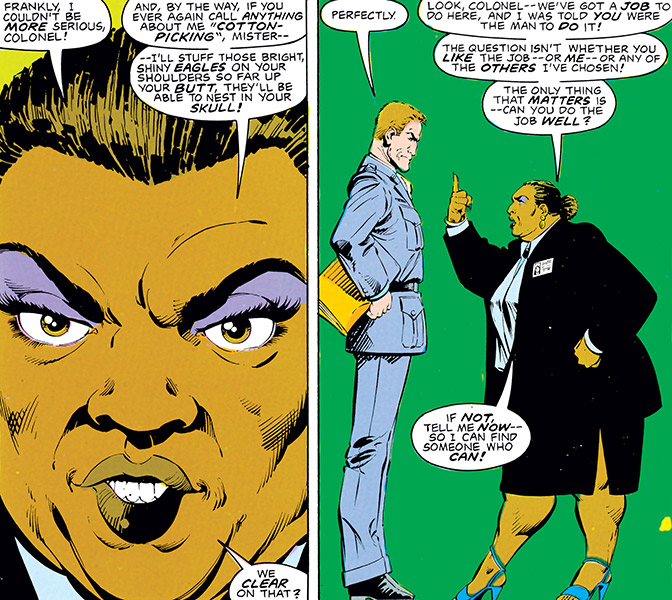 The original incarnation of Amanda Waller and her Suicide Squad made their debut in the 1986-87 limited series LEGENDS, when the team fought a monster called Brimstone, created by Darkseid. This version of Amanda Waller not only oversaw several versions of the Squad, but led the agency Checkmate and served as federal cabinet secretary of metahuman affairs. Due to recent changes taking place in DC Comics, these roles do not apply to the current version of the DC Universe. Nor does the younger, more ruthless version of Waller introduced in the New 52.

As far as the current history of DC Comics is concerned, Waller’s Suicide Squad has only been around for a few years. 2017’s SUICIDE SQUAD vol. 1 #9 revealed her original team included the metahumans Cyclotron, Emerald Empress, Dr. Polaris, Johnny Sorrow and the alien bounty hunter Lobo, led by Waller’s operative Rustam. The team was sent to the island nation of Jagsun to kill a group of metahumans intended for use as living WMDs against other countries. But the operation quickly led to serious civilian casualties. Matters worsened when the team attempted to use Jagsun’s advanced technology for their own purposes. Seeing no choice but to put them down, Waller turned Cyclotron into a living bomb to kill the Squad. To her surprise, they survived the blast, apparently due to a shield created at the last minute by Dr. Polaris.

Satisfied that there was no evidence of U.S. involvement in these events, Waller imprisoned her first Squad in a secret location called the Catacombs. She was henceforth more selective of Squad members, and used implanted explosives to ensure they could not betray her as her first recruits had done.

After some time, the White House expressed concern regarding Waller’s operations, as seen in the 2016 one-shot SUICIDE SQUAD: REBIRTH #1. In response, Waller recruited two people of higher moral caliber to lead the Squad: Navy SEAL Colonel Rick Flag, known for putting the safety of others above his own life and career, and Flag’s second-in-command, Tatsu Yamashiro. Better known as Katana, Yamashiro is a disciplined, driven warrior with a sword capable of stealing souls. Several times since, Waller has clashed with Flag over the actions and tactics of the Squad.

In one of his earliest missions as field leader, Flag led the team against the Kryptonian villain General Dru-Zod (in SUICIDE SQUAD vol. 5 #1-4, 2016-17). During this mission, Waller and the Squad learned of a new metahuman arms race, as Russia created its own version of the Squad: the Annihilation Brigade.

In “Maxwell Lord: Rebirth,” presented in 2017’s JUSTICE LEAGUE vol. 3 #12, Amanda Waller brought in Maxwell Lord, leader of the counterterrorism and metahuman threat agency Checkmate. Waller told Lord she’d learned of his murderous actions over the years in order to climb the ranks of power. In an attempt to thwart Waller, Lord freed the original Suicide Squad from the Catacombs, convincing them he was their best hope for revenge. 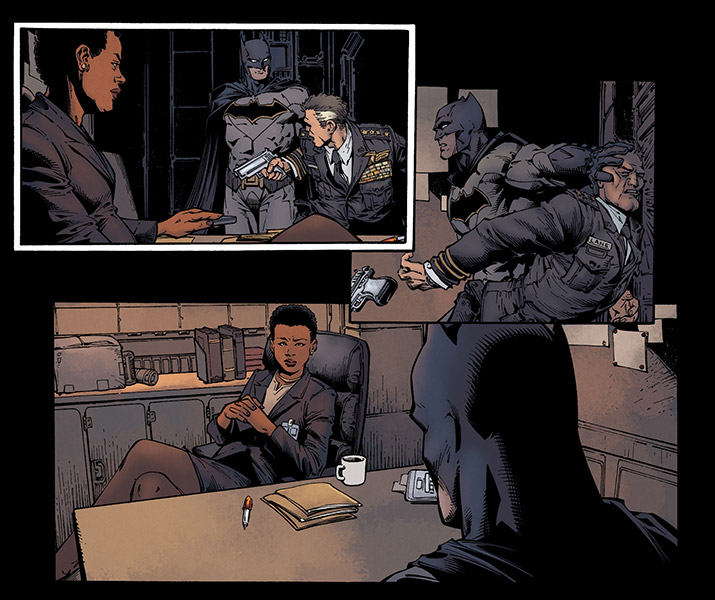 Batman learned of the existence of the Suicide Squad and confronted Amanda Waller about it in 2016’s BATMAN vol. 3 #4. Waller manipulated Batman into a mission overseas, and then broke into the Batcave and accessed its computers (BATMAN vol. 3 #13, 2017).

Batman then informed the Justice League of Task Force X, leading to the 2017 crossover miniseries JUSTICE LEAGUE VS. SUICIDE SQUAD. After the League attempted to apprehend the Squad, the original Suicide Squad attacked. In the resulting chaos, Maxwell Lord corrupted most of the Justice League, forcing Batman to unite with the Squad to free the League from Lord’s influence.

With Lord incarcerated, Batman admitted he saw the value in Task Force X. The League chose not to shut down the Suicide Squad. Killer Frost then became the first Squad member released from a prison sentence, and she joined the Justice League of America. Lord believed this entire series of events may have been orchestrated by Waller so the League would accept her Squad. 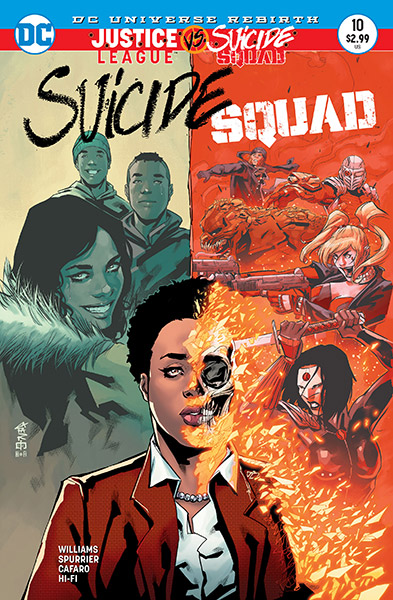 In 2017’s SUICIDE SQUAD vol. 5 #10 (the epilogue to 2017’s JUSTICE LEAGUE VS. SUICIDE SQUAD event), Amanda Waller encountered her three surviving children for the first time in two years as she sought to protect them from the villainous Rustam. As it turned out, Rustam’s revenge was not to kill Amanda’s children but to force them into this meeting, confronting them with the reality of what had become of their mother following the deaths of their eldest siblings and father. Waller’s children then decided they wanted nothing to do with their mother. The experience shook her as few events have.

Following Rustam’s revenge, Waller faked her death so she could trick him into eliminating many of her own enemies, as chronicled in 2017’s SUICIDE SQUAD vol. 5 #11-15. After revealing how she had turned his threat into a weapon, she took Rustam into custody.

Since then, Waller has continued to do whatever it takes to ensure success for the Suicide Squad. If she is, as some claim, the Devil, then they should be thankful she only preys on evil.

• Batman: The Enemy Within