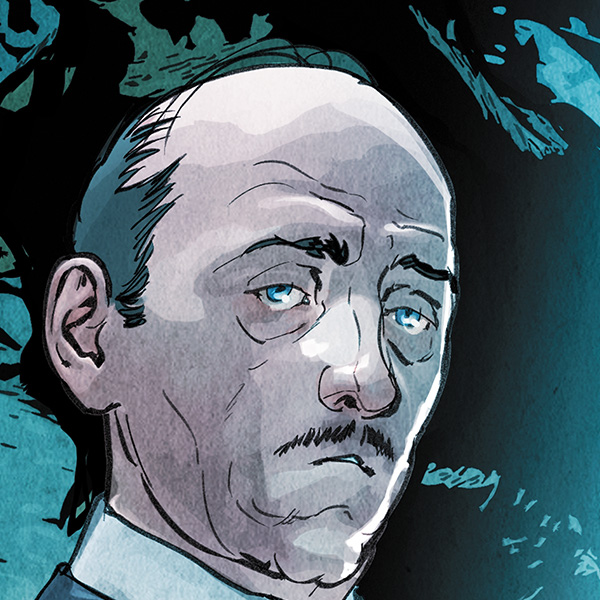 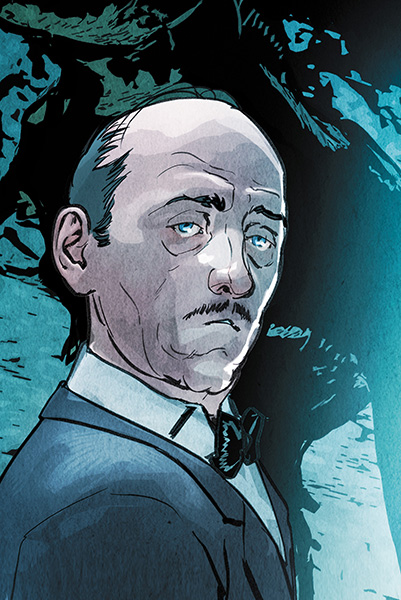 A British special forces veteran turned butler, Alfred Pennyworth is the most loyal friend and confidant of both Bruce Wayne and Batman.

A British special forces veteran turned butler, Alfred Pennyworth is the most loyal friend and confidant of both Bruce Wayne and Batman.

Alfred Pennyworth is more than just Bruce Wayne’s butler, or Batman’s confidant: Alfred is a second father to Wayne, and serves as his conscience when the never-ending fight against evil wears on the Caped Crusader. Pennyworth keeps the Bat Family together through his compassion and leadership. He has not only raised Bruce Wayne, but also the four young men who have worn the mask of Robin, the Boy Wonder: Dick Grayson, Jason Todd, Tim Drake, and now Damian Wayne.

As a former British intelligence officer, field medic and trained Shakespearean actor, Alfred is uniquely suited to support the lives of masked crime fighters. He's quick with a disguise, a cover story, an alibi; and quicker still with a suture, a cast, or an ice bath. He ensures that Wayne Manor -- all of Wayne Manor, including the vast Batcave -- is operating at peak performance while the Bat Family patrols the city. Plus, he makes a mean cucumber sandwich, which may not be something he lists on his resume, but is certainly something everyone who sets foot on the manor's grounds will fondly remember. 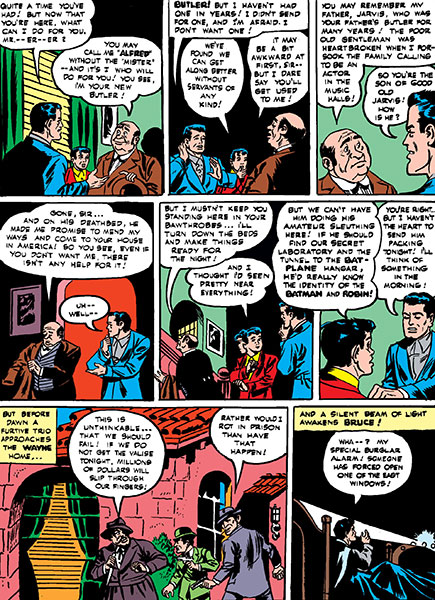 A veteran of the British special forces agency, MI-5, being the butler of the Wayne family was anything but young Alfred's dream, despite the fact that his father, Jarvis Pennyworth, considered his position both an honor and a family duty. Alfred served as an intelligence agent and field medic in World War II before retiring and taking up classical Shakespearean acting with a traveling company.

However, after hearing that his father had taken ill, Alfred made the move from England to the states and, despite his belief that his calling had been elsewhere, took up his father's position to honor the dying man's wish.

Alfred worked as the Wayne's butler, helping both Thomas and Martha with care of the manor as well as with raising their young son, Bruce. When tragedy struck and the elder Waynes were murdered in Crime Alley, Alfred became Bruce's legal guardian and full time caretaker.

Years passed and Alfred eventually learned of Bruce's secret, discovered the cave entrance behind the clock, and began taking part in the daily life of the Batman as well -- despite his not-so-secret concern for Bruce's health and safety. With Alfred's help, Bruce learned to create disguises and fake identities for himself to better help gather information about his targets. Alfred's army training also came in handy whenever Bruce would return from a night of crime fighting injured and unable to go to the hospital at risk of exposing his identity.

Alfred is more than just a capable butler: he is also an accomplished actor, and has even used his skills to impersonate Bruce Wayne over the phone. He has also offered acting advice to Bruce Wayne early in his career as Batman and has the  ability to go undercover has helped Batman gather intel.

Alfred’s time in the service has left him a more than capable medic, and he can also hold his own in a fight, when called for. He also has a keen analytical and strategic mind and has often provided Batman with an additional perspective on a case, or helped to coordinate the Bat Family from the Batcave. The owner of a shotgun, Alfred is the only member of the Bat family Batman approves of having a firearm.

But perhaps Alfred Pennyworth’s greatest ability is that of caretaker and mentor. He has been friend, role model, and father figure to all of the Robins—as well as to Bruce Wayne himself—and, because of this, is the heart of the Bat Family. 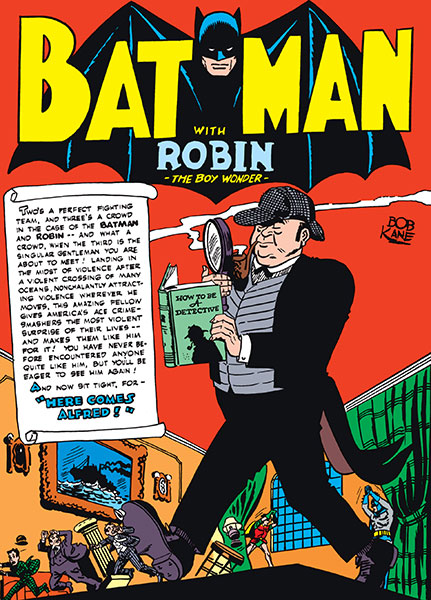 Alfred's original incarnation was unrecognizable by modern standards. A bumbling, overweight detective who fancied himself something of a Sherlock Holmes, Alfred arrived at Wayne Manor and insisted upon become Bruce and Dick's valet. They begrudgingly agreed, though they realized they were putting their secrets at risk allowing someone to get so close.

Alfred eventually uncovered the truth of Batman and Robin, though not by any fault of his own. He hit a switch uncovering the entrance to the Batcave on complete accident, and was thus brought into the Cape Crusader's inner circle, less because of his value and more because he would have been a liability otherwise.

Throughout his early years, Alfred played off and on roles in Batman stories, sometimes as a plucky sidekick, sometimes as comic relief and sometimes as an unwitting villain tricked or manipulated into working against the Dynamic Duo against his will.

Just one year after his debut, Alfred's appearance was given a dramatic update in DETECTIVE COMICS #83 (1944). On paper, the reason for his transformation was a "vacation to a health spa" but in reality, he had been updated to more closely resemble actor William Austin who had played him in the live action Batman serial films. 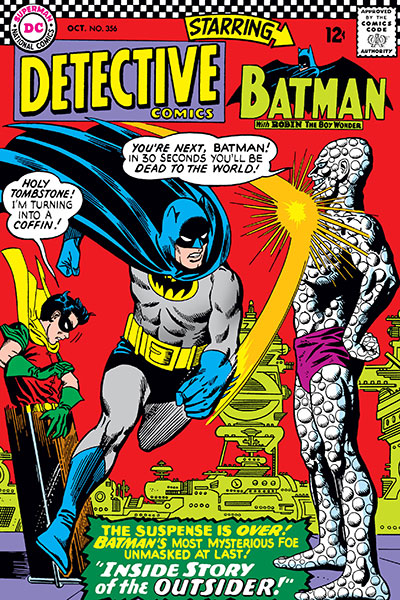 For a brief period in the 1960s, Alfred was "killed" (DETECTIVE COMICS #328, 1964) and resurrected by a scientist named Brandon Crawford. His brush with death had given him superpowers, including telekinesis, which he used to craft a mysterious alter ego for himself known as "The Outsider." As The Outsider, Alfred fought against Batman and Robin using proxies and gangs under his control until a confrontation against Batman directly caused him to regain his senses and return to his old self. He retained no memory of his time as The Outsider after the event.

Shortly before the massive continuity-altering events of 1985's CRISIS ON INFINITE EARTHS it was revealed that Alfred had a daughter named Julia Remarque, who he had fathered with the French World War II hero, Mademoiselle Marie. Julia was raised away from Alfred by her adoptive father, Jacques Remarque, and only learned the truth of her parentage upon her mother's death (DETECTIVE COMICS #502, 1981).

Julia traveled to Gotham were she confronted Alfred where she eventually became a target for the assassin Deadshot, who had evidently been hired by Remarque himself, which subsequently brought her closer to her real father. With Deadshot dealt with and the mystery of Remarque's betrayal solved, Julia moved to Gotham full time where she became invested in both her father and Bruce Wayne's lives. She began working as a reporter for the Gotham Gazette and sparked an on-again-off-again romance with Bruce, which she maintained until the Crisis. 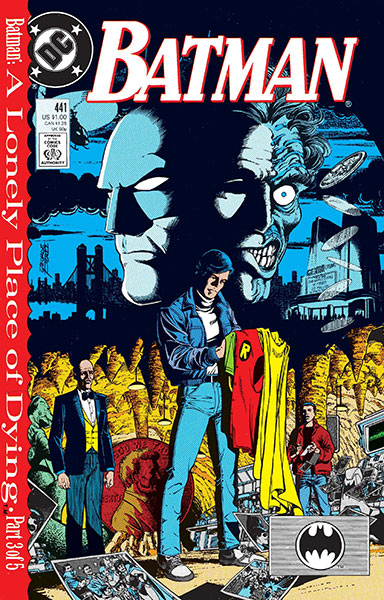 Faced with the realization that Tim Drake discovered Bruce Wayne’s secret identity as Batman, it was Alfred who encouraged Tim to wear the late Jason Todd’s Robin costume. Bringing Tim to the scene of Batman and Nightwing’s battle with Two-Face, he confronted the villain with the new Boy Wonder. It was this mission, and Alfred’s support, that led Bruce to accept Tim as a new Robin-in-training.

Batman had been pushing himself too hard in his crime fighting, to the point of sheer exhaustion. Alfred did all he could to keep Bruce together, urged him to seek help and allow himself to heal. When at his lowest, Batman was faced with a mass breakout at Arkham Asylum, orchestrated by Bane. It was Alfred alone who first encountered the villain at Wayne Manor and was knocked unconscious. Alfred quickly recovered and, with the help of Tim Drake and Jean Paul-Valley (Azrael), was able to save the badly beaten and broken Batman.

Alfred stood by the now-paralyzed Bruce Wayne on his own quest to save the kidnapped Dr. Shondra Kinsolving and Jack Drake (Tim’s father). After rescuing Jack Drake, Alfred urged Bruce to rest, but was forced to resign and leave Bruce’s life.

It is Dick Grayson who, as Nightwing, tracked Alfred to London, and convinced him to return to the now-recovered Bruce, who has healed and once more taken on the mantle of Batman. 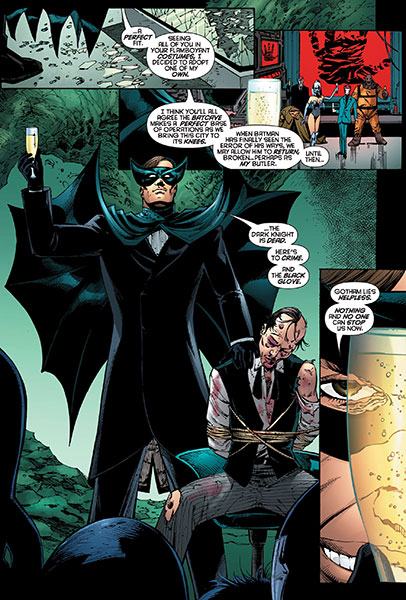 Later, Alfred was beaten and held hostage by Doctor Hurt and his minions, who had successfully attacked the Batcave. Alfred endured Hurt’s torture, and survived long enough for Robin (Damian Wayne) to rescue him.

With Bruce Wayne apparently killed during the events of FINAL CRISIS, Alfred established a new Outsiders team to take Batman’s place, but ultimately encouraged Dick Grayson to take on the mantle of the Bat. It was this new Batman and Robin, both sons of Bruce Wayne, who protected Gotham until Bruce Wayne returned from his apparent death. Alfred served as the stabilizing presence for both Dick Grayson and Damian Wayne as they fought the Super-Villains of Gotham, and sometimes one another. 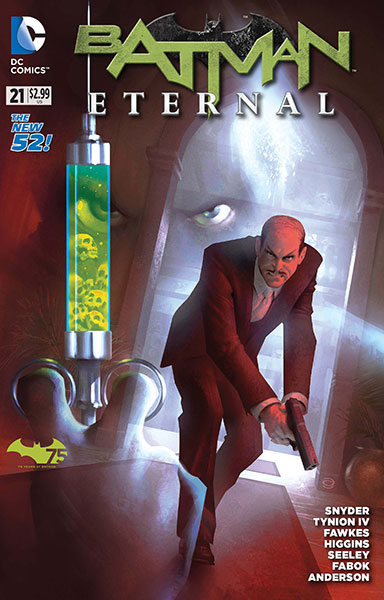 Following the events of 2011's FLASHPOINT, Alfred's history was largely left unchanged with the exception of a daughter who had been secretly working as a secret agent for years. The daughter of one of Alfred's WW2-era loves, Mademoiselle Marie, Julia believed Alfred had abandoned her and harbored a considerable amount of resentment toward him. This incarnation of Julia was inspired by, but independent from the Bronze Age Julia Remarque, who had been deleted from continuity during CRISIS ON INFINITE EARTHS.

After her life was saved by Batman and she was reunited with her father in Gotham, Julia and Alfred began to regain some trust in one another. Julia and Bruce began professional relationship relationship as she took up a position at her father's side to help Batman's crusade. Alfred, who's radio codename had been "Penny-One," assigned Julia the codename "Penny-Two."

Together, Alfred and Julia were able to fend off an attack on the Batcave by Tommy Elliot, aka Hush (in 2015's BATMAN ETERNAL). 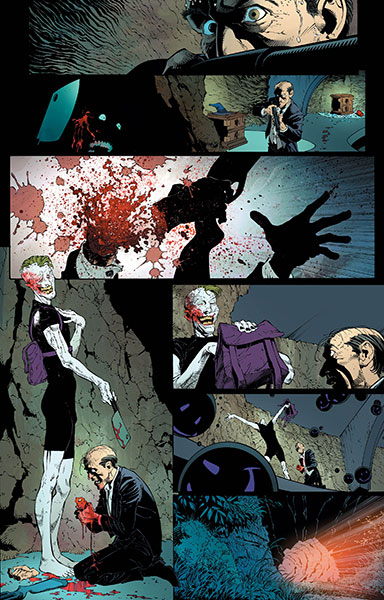 Later, Alfred’s right hand was cut off by Joker when the Clown Prince of Crime invaded the Batcave (in 2015's "Endgame" storyline). Alfred survived the attack, but believed Batman had been killed in the ensuing showdown. Ever loyal to Bruce’s mission, Alfred and Julia kept the Batcave operational for the Bat Family as a center of operations.

Eventually, Alfred learned that Bruce had, in fact, survived his fight with the Joker but had forgotten everything about his life as Batman. Rather than attempt to convince him to learn the truth, Alfred happily allowed Bruce to live his life as a normal man, despite the potential dangers that meant for the rest of Gotham.

Partly driven by his own guilt for allowing Bruce to live a lie, Alfred began secretly supplying technology and weaponry to a group of amateur crime fighters who had taken up the name "Robin" during Batman's absence (in 2015's WE ARE ROBIN) but stopped after the "Robin War" took hold of the city putting too many kids at risk.

When Bruce began to suspect there was more to his life than he was remembering, and when Gotham began to teeter on the brink of yet another collapse as the GCPD became overwhelmed with a new villain, the monstrous Mr. Bloom, Bruce insisted that Alfred allow him to enter the Batcave again. Prior to his "death" Bruce had been engineering a machine that was capable of transplanting or restoring memories and skills -- something Bruce had designed believing it would prevent Gotham from ever being without a Batman. The procedure was experimental and risky, but Bruce insisted that Alfred operate the machine, allowing Bruce to return to his life as the Caped Crusader. Alfred, despite his own reservations, complied.

Later, after Bloom's defeat, Alfred had his hand surgically reattached and reinstated himself as Batman's partner and confidant.