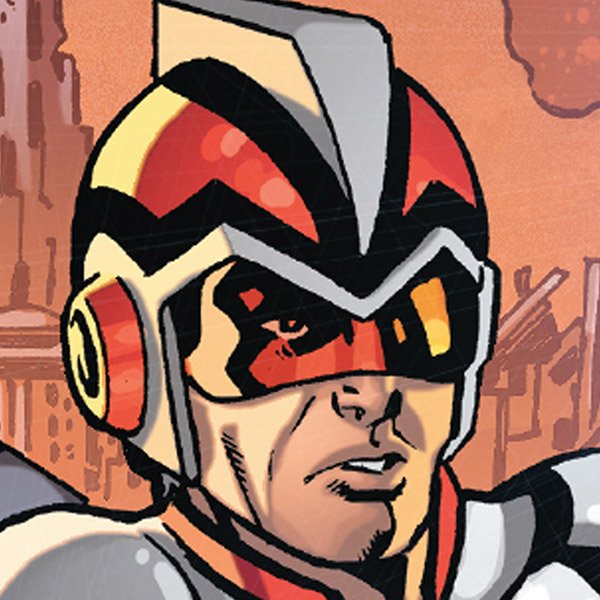 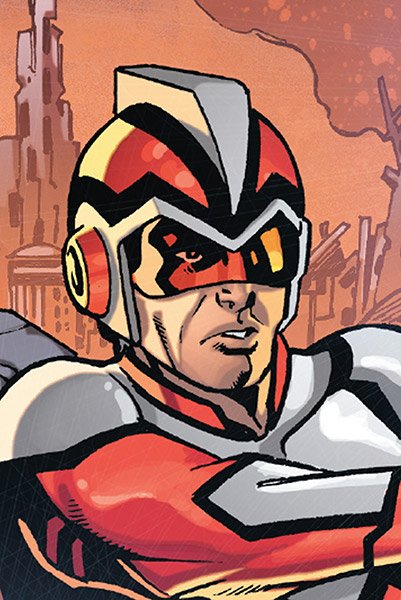 An Earth archaeologist blasted across the cosmos by Zeta ray technology, Adam Strange finds adventures undreamt of by the side of his beloved Alanna on the planet Rann.

An Earth archaeologist blasted across the cosmos by Zeta ray technology, Adam Strange finds adventures undreamt of by the side of his beloved Alanna on the planet Rann.

A genius archaeologist, Adam Strange was lonely and lacked direction in his life until the day Zeta radiation beams first transported him to the planet Rann, where he found love and a new career as an intergalactic Super Hero. Eventually, Adam married his soul mate, Alanna, and the couple had a child, Aleea. Though Adam never ignores the call to battle evil, and off-world peril has often forced them apart, the Earthman always finds a way to return to his adopted home and family.

Adam Strange was born in Chicago. Feeling unwanted and largely neglected by his parents, Adam found a friend in his older brother Todd and considered his sister Janey (the oldest child) a second mother.

Adam’s mother died when he was still an adolescent, and Todd ran away soon afterward. Adam’s father, already in poor health, grew more ill and needed constant care. At 16, the brilliant Adam left home to study archaeology, and found fame at the age of 23 for his findings at the Crawnee Caveman Dig. A wing at the Natural History Museum was subsequently named after him.

A few years later, Adam learned his brother Todd had died in Singapore. Adam then lost two of his team members in a cave-in on one of his expeditions. Adam became increasingly reclusive in his work.

While exploring the Andes Mountains of Peru by himself, Adam discovered a legendary city called Caramanga. A tribe of Incan people still lived in the city and attacked him. As he fled, a beam of “Zeta” radiation struck and transported him roughly 4.35 light years (approximately 25 trillion miles) to Rann, a planet orbiting Alpha Centauri.

Adam was immediately found by the Rannian woman Alanna, who took him to meet her father Sardath in the capital city of Ranagar. A scientist, Sardath was in charge of the council that ruled Rann, and Alanna was considered a princess. A “menticizer” device instantly taught Adam their language, in which they explained that years ago Rann had sent communication beams, Zeta waves, to Earth. Alanna concluded that the Zeta Beams had been altered while traveling through space, becoming teleportation beams (SHOWCASE vol. 1 #17, 1958).

In later stories, this was revealed to be a lie. Rannians had become sterile and their society was stagnant, so Sardath had deliberately teleported an Earthman to Rann in order to introduce “new blood” and act as both stud and hero (SWAMP THING vol. 2 #57-58, 1987).

Alanna and Adam grew close. When aliens attacked Rann, Adam helped fight them off, but was then transported back to Earth as the Zeta radiation in his body faded away. Determined to return to Rann, Adam mapped out sites on Earth where Zeta Beams would strike, based on information he’d learned from Sardath. Whenever a beam struck, he reunited with Alanna and helped her protect her homeworld. During his second such adventure, Adam donned a personal jetpack and the first version of the red-and-white space suit he’s made famous (SHOWCASE vol. 1 #17, 1958). 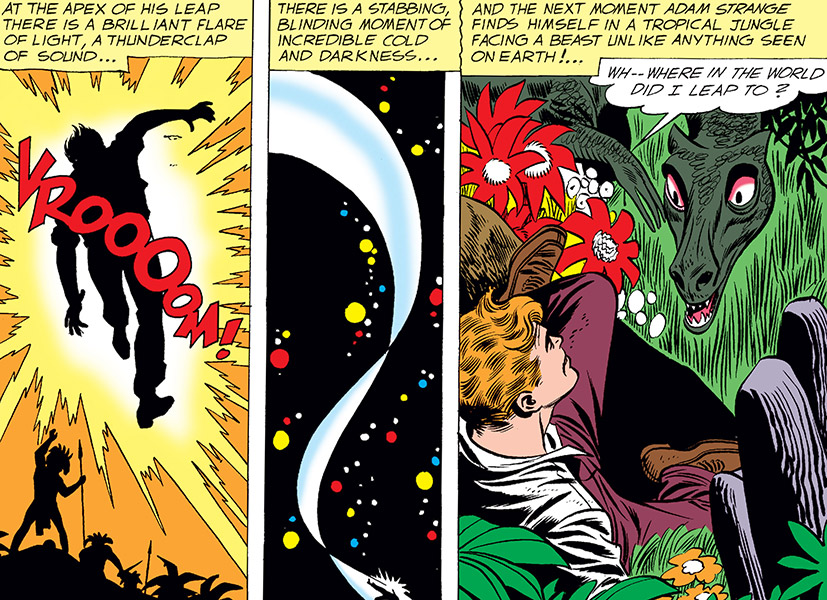 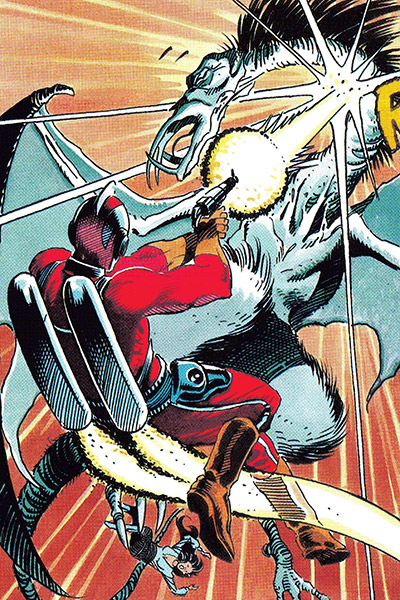 Adam Strange is a human with no superpowers who engages in regular exercise and is in good health. He is an expert marksman with years of experience in hand-to-hand and aerial combat.

Adam Strange has a genius-level intellect, with a talent for puzzles and mathematics. He is an archaeologist educated in various cultures, histories and languages of Earth and many other planets. Adam is also an expert in engineering and technology developed on the planet Rann.

Adam often goes into battle with an energy blaster gun and a jetpack. Adam wears an insulated environmental suit to provide warmth and protection in different environments and the vacuum of outer space. The suit connects to a helmet that provides air and communications. The heads-up display (HUD) provides information, controls his equipment and provides targeting help with his blaster.

For a time, Adam wielded “holo-blasters” that created hard light armaments and shields. In some stories, Adam’s suit had a “Zeta Beamer” allowing space warp travel.

For a while, Adam Strange was given enhanced eyes that perceived the entire electromagnetic spectrum. 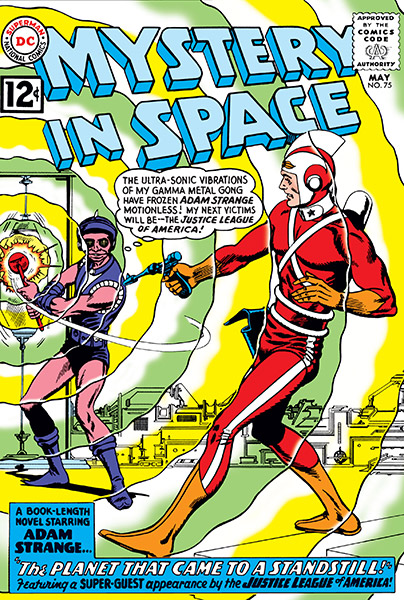 During one visit to Rann, Adam Strange fought Kai space pirates and was transported back to Earth along with a teleportation vehicle. Adam then used the Kai teleporter to return to Rann immediately rather than wait for a Zeta Beam, which also meant he wouldn’t be forced back to Earth once the Zeta radiation wore off (MYSTERY IN SPACE vol. 1 #74, 1962).

Adam and Alanna lived together for months, exploring Rann’s natural wonders and history. The alien villain Kanjar Ro arrived, and Adam stopped him with the aid of Earth’s Justice League of America—though not before Kanjar Ro bathed him in radiation that affected his health. As a result, Adam couldn’t stay on Rann for long periods of time without his body being lethally poisoned by the solar radiation of Alpha Centauri. Adam returned to Earth and settled for the short-term visits to Rann the Zeta Beam permitted. The Justice League offered him membership soon afterward, but he declined (MYSTERY IN SPACE vol. 1 #75, 1962).

After some time, Sardath eliminated Kanjar Ro’s radiation from Adam’s body. He and Alanna finally married (HAWKMAN vol. 1 #18, 1967). Over the next several years, Adam continued his regular visits to Rann while aiding Super Heroes on Earth. Eventually, he joined a short-lived new incarnation of a fabled Golden Age Super Hero team, the Seven Soldiers of Victory (SILVER AGE SHOWCASE #1, 2000).

During one adventure with the Earth elemental Swamp Thing, Adam discovered that Alanna was pregnant. It was the first pregnancy on Rann in 20 years (SWAMP THING vol. 2 #57-58, 1987).

Sardath created a “Mega Beam” that would permanently transport Adam to Rann, as its radiation wouldn’t wear off. Wanting to settle his affairs on Earth, Adam visited his sister and dying father and told them the truth behind his repeated absences. But they didn’t believe it and shunned him. Adam spent the evening in the company of his father’s doctor, Evelyn Fox. Early the next morning, he learned his father had died.

Alanna discovered that her father had intentionally brought Adam to Rann in order to use him as a stud. The Mega Beam then delivered Adam, but gave him hallucinations that sent him into a rage. He immediately attacked Sardath, making him a fugitive. This led to an adventure in which Adam discovered just how corrupt Rannian society was and how Sardath and its leaders had exiled and/or executed anyone deemed undesirable. Meanwhile, a second Mega Beam, fired in case Adam missed the first one, brought Evelyn Fox to Rann.

Dr. Fox wound up treating Alanna when she went into labor, delivering Adam’s baby daughter Aleea. But Alanna was not well following the difficult labor. Dr. Fox told Adam that Alanna had died from complications. After dealing with depression and grief, Adam found new purpose as a parent to Aleea (ADAM STRANGE vol. 1 #1-3, 1990). 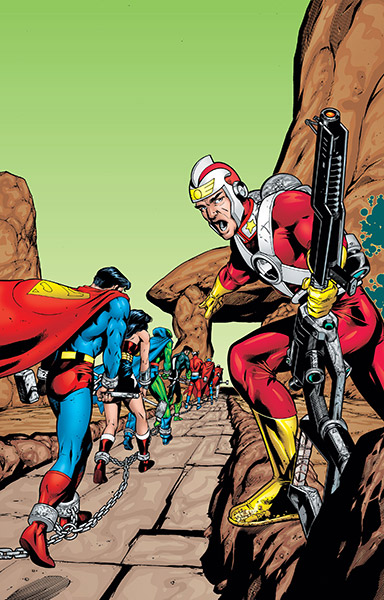 Unbeknownst to Adam Strange, Sardath discovered Alanna was alive but in a deep coma. Dr. Fox had mistaken her condition for death, due to a misunderstanding of how Rannian biology differed from Earth human biology. Sardath placed Alanna in suspended animation, and then traveled through space to find a way to heal her. Eventually, the alien conquerors and slavers known as En’tarans restored Alanna. Yet upon discovering the nature of Zeta Beam technology, the En’tarans took Alanna and Sardath hostage, and demanded Adam aid them in invading other worlds.

Adam convinced the En’tarans to allow him and the Justice League of America to rebuild Rann to its former glory as a prize base for them. Adam had the League rescue Sardath and Alanna. He then used the Mega Beam radiation in his body to transport the entire En’taran army to the prison planet Takron-Galtos. Without the radiation, Adam was transported back to Earth and once again relied on tracking down Zeta Beams so he could reunite with his family. (JLA vol. 1 #20-21).

Eventually, Sardath developed a new way to ensure Adam permanently stayed on Rann without having to wait years for another Mega Beam. But before this happened, Superman reported to Adam that Rann’s primary sun had gone supernova and wiped out the planet. Adam fell into a depression, believing his wife and child were gone.

Six months later, aliens attacked Adam and demanded to know the location of Rann. Returning to his life as a hero, Adam discovered that Sardath had actually transported Rann into another dimension through use of an “Omega Beam” to protect the world from the powerful villain Starbreaker. With the help of several other heroes, Adam defeated Starbreaker and at last took up permanent residence with his family on Rann (ADAM STRANGE vol. 2 #1-8, 2004).

Eventually, an accident with the Zeta Beam resulted in Adam losing his eyes. His daughter Aleea cloned new eyes for him, engineered to see the entire electromagnetic spectrum (52 vol. 1, 2006).

Over the next few years, Adam got involved in many other adventures with different Super Heroes, as well as a short-lived holy war between Rann and Thanagar. He also joined the group called R.E.B.E.L.S., led by alien genius Vril Dox (a.k.a. Brainiac II). Dox transported Rann back to its native dimension, to a new home in the Vega system, occupying the orbit once belonging to the destroyed planet Tamaran. When Dox briefly tried to re-create his interplanetary police force L.E.G.I.O.N., Rann became its home base and Adam Strange was named its Senior Commander (R.E.B.E.L.S. #12-28, 2009-2011). 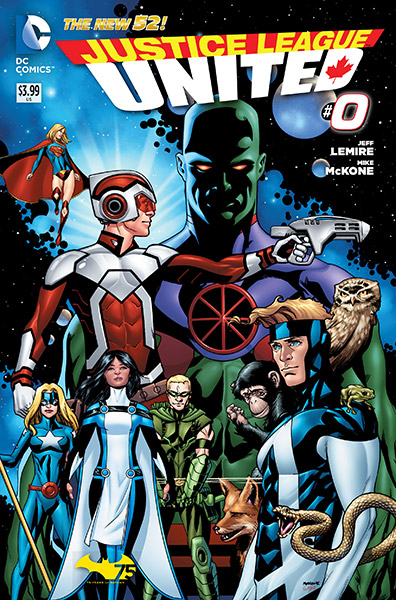 In 2011 the DC Universe was reimagined in the New 52. In this version of history, Adam Strange was an anthropologist at the University of Toronto, and Alanna Lewis was his student, before becoming his assistant and eventually fiancée. During a dig, Alanna vanished in a beam of light. Adam then discovered Earth was under attack by aliens. To help win the battle, Adam stole alien technology and a space suit.

During this adventure, Adam was reunited with Alanna, who donned a suit similar to Adam’s in order to fight. The two met the Rannian scientist Sardath, who then activated a teleportational Zeta Beam. A malfunction caused Alanna and Adam to experience deadly “feedback” whenever they were near each other. The Zeta Beam was used to ensure Alanna and Adam switched places with each other on Earth and Rann, never occupying the same planet simultaneously. Both joined the team called Justice League United (JUSTICE LEAGUE UNITED #0-4, 2014).

During a later adventure, this version of Adam Strange was lost and presumed dead.

In 2016 DC’s Rebirth restored much of the universe’s pre-New 52 history. It’s not yet clear how this has affected Adam Strange.